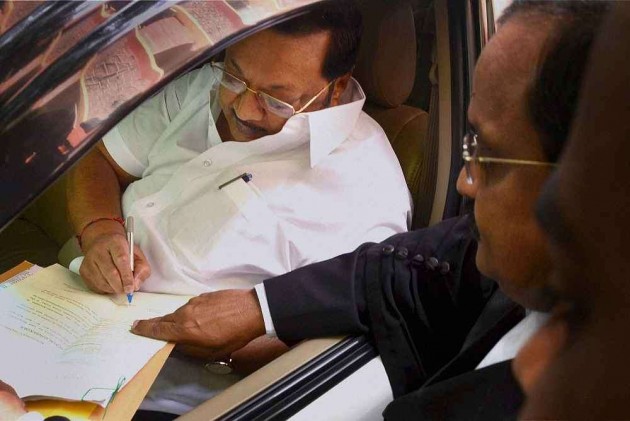 Former Union Minister and expelled DMK leader M K Alagiri today surrendered before the Judicial Magistrate Court I here in a case relating to alleged grabbing of land and was granted bail till tomorrow.

Magistrate Triveni granted him bail till tomorrow on personal sureties given by two persons.

On August 28, the High Court had granted him bail till September 3 in the case and posted the hearing to that date.

The district crime branch and anti-land grabbing special cell had filed a case against Alagiri, son of DMK chief M Karunanidhi, alleging he had created false documents for the purpose of cheating and had grabbed 44 cents of land belonging to a Vinayagar temple for Dhya Engineering college at nearby Sivarakottai, run by a trust headed by him.

The complaint about the alleged land-grabbing had been lodged by the Assistant Commissioner of Hindu Religious and Charitable Endowments (HR and CE) Board, Karunanidhi.

Justice K Kalyanasundaram had granted bail to Alagiri till Sept 3 and posted the case for hearing on that date.

Alagiri, founder-president of MK Alagiri Educational Trust, had submitted that the Trust, set up to provide education for poor students, had constructed the engineering college and had purchased several tracts of land. The land was outside the college and purchased from one Sampath through proper means by payment of cheque and sale deed.

He said the land originally belonged to another man who had given it to a woman in exchange for the land he had given to her. Sampath had purchased it from the woman and the Trust had bought it from him.

While this was the fact, the HR&CE Department had 'suddenly' put up a fence on land bought by the Trust, he had submitted and pointed out that two civil suits regarding the case are pending in civil courts.

Alagiri said he had to fight for three years to get affiliation for his college, for which state authorities had placed several hurdles. The charges levelled against him in were made with malafide intention and averments were without material facts, he had said and pleaded innocence.

He had also submitted that he and his family members are law abiding citizens and would not abscond and abide by the condition of the court and had sought anticipatory bail.