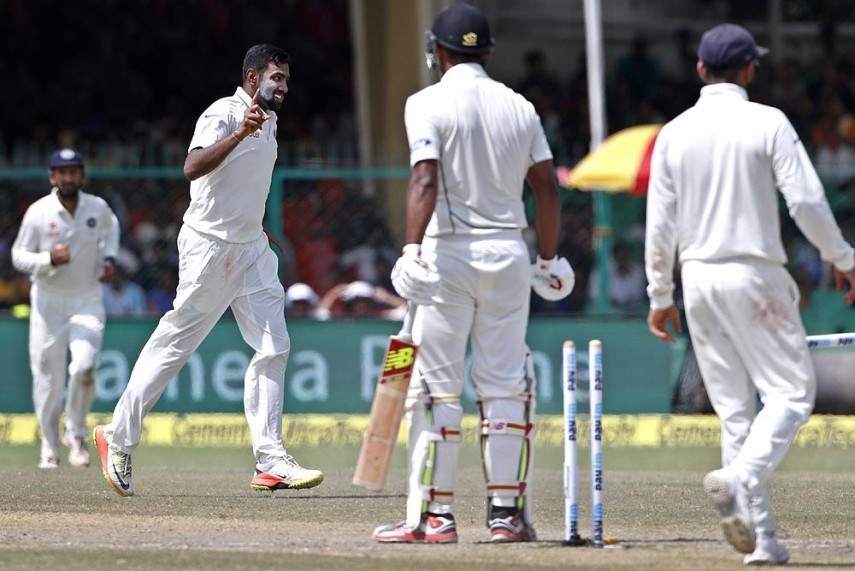 Star India all-rounder Ravichandran Ashwin kept his team firmly on course for yet another comprehensive victory, outclassing England on all counts here at the end of the third day's play in the third cricket Test.

At stumps, England were in deep trouble at 78 for four, still 56 runs in arrears and only six wickets at their disposal.

Earlier in the day, Ravindra Jadeja smashed his way to a career-best 90 while Ashwin hit 72 as lower middle-order once again put up a power-packed performance to score a commendable 417 in the first innings, thereby giving India a healthy 134-run lead over England.

Having set up the match with a well-compiled half-century with the bat, Ashwin (3/19 in 12 overs) came back to remove rival captain Alastair Cook (12), Moeen Ali (5) and Ben Stokes (5) as India tightened the noose around England. Jayant Yadav (1/12 in 6 overs) then came in to remove first innings half-centurion Jonny Bairstow (15) before the close of play.

England's No 1 batsman Joe Root (36 batting, 101 balls) stands between India and victory. While he may not be 100 per cent fit but Ashwin looked like getting a wicket with most of his deliveries. On a pitch where Moeen Ali and Gareth Batty looked ordinary, Ashwin, with his length and deception, looked more potent.

It seemed Ashwin has been successfully able to play on Captain Cook's mind as he again tried in vain to indulge in a game of survival.

Cook survived a couple of close calls on DRS but then Ashwin bowled one that angled in with skipper playing down the wrong line only to find his bails clipped off.

Moeen, batting at No 3, didn't reach to the pitch of the delivery and his forced chip shot could not clear Jayant Yadav at mid-on, who ran a few yards back to complete a reasonably simple catch.

The highlight of the first two sessions was Jadeja's 90 off 170 balls that had 10 fours and a six. His partnership of 97 with Ashwin is likely to have a great impact in the final context of the match.

Not to forget the 80-run stand he shared with rookie Jayant (55, 141 balls, 5x4), who also helped himself to a maiden half-century in Test cricket.

Jadeja also eclipsed his previous best of 68 against the same opposition at Lord's in 2014.

Debutant Jayant, India's 'find of the series' once again impressed with his fighting qualities as his gutsy innings ensured that India scored 400-plus for the third consecutive time in the series.

For the record, no visiting team has won against India after having conceded 65-run lead in the first innings. The last time it happened was 52 years ago, back in 1964 when Bob Simpson's Australia won after conceding a 65-run first innings lead. (REOPENS DEL 30)

It was also the first time in the history of Indian cricket that three players -- Ashwin, Jadeja and Jayant -- batting at No 7 or below have scored a half-century each in the same innings.

Jadeja started the post lunch session in style as he hammered Chris Woakes bowling from the press box end for four boundaries in an over.

The next over from the end saw Woakes being removed and Adil Rashid (4/118) being introduced.

Jadeja jumped out at the first opportunity in his bid to loft him for a six but was caught by Woakes at the long-on boundary to miss out on a Test ton.

Earlier, there couldn't have been a better start for the hosts as Woakes bowled a juicy half-volley on the pads for Ashwin to clip one to the boundary.

The lead came when Jadeja lofted Moeen Ali over mid-off in the last delivery of the 88th over.

Ashwin was looking in fluent touch as he slashed Woakes hard for a boundary between point and cover region. It was followed with another fluent drive as the all-rounder reached 70s.

Finally after India reached 300, Ben Stokes broke the partnership with Ashwin playing a lazy drive to a delivery way outside off-stump only for Jos Buttler to take a low catch.

But Jadeja got an able ally in Jayant as the duo didn't curb strokeplay, showing positive intent.

The Saurashtra all-rounder duly completed his fifty when he pushed Rashid for a single and celebrated it with a customary sword wielding. As if to drive home a point, he flat batted Stokes over mid-on for a boundary.

Young Jayant showed his batting prowess once again as he on drove and square drove Jimmy Anderson before playing a pull-shot off Rashid. He duly competed his half-century in 132 balls.