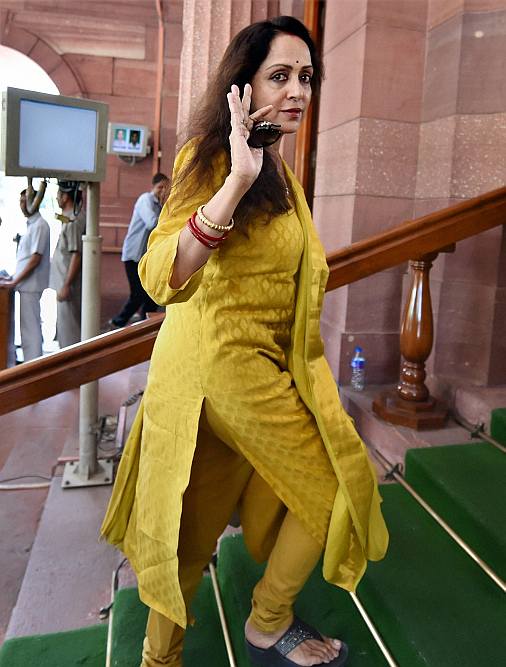 Actress-politician Hema Malini today faced flak and left her party red faced after she shared pictures of her film shoot here as violence erupted in her constituency Mathura.

She, however, tried to downplay her gaffe putting the blame on Akhilesh Yadav government.

A total of 24 people, including an SP and an SHO, were killed in clashes between police and members of a sect who had encroached on government land in Mathura yesterday.

The BJP MP said she should not be blamed for the incident as she could not have predicted the situation.

"I went for shooting. I was unaware... So, I just tweeted. How do I know this was going to happen? My people in Mathura told me that there is no need for you to come as they are handling everything," Malini told reporters.

The actress said being an artiste she had to keep her prior commitments as she had already given the dates for the shoot.

Malini had uploaded photographs from her shoot but quickly deleted her posts and later condoled the death of the SP and SHO. She was slammed on the social media.

She also tweeted that she had just come back from Mathura and "will go there again if my presence is required".

The actress blamed the Uttar Pradesh government for mishandling the law and order situation in the city.

"It could have been averted. The administration has been asking for extra power to control these people but somehow the UP government has not given them the authority to go ahead with that. So, they were waiting.

"For two months, the fight was constantly going on between the police and those people and then yesterday, it erupted in such a way that was not expected at all. Akhilesh Yadav's government has to take care of the law and order properly which somehow has not happened."

BJP sought to downplay Malini's ill-timed tweets, which generated a lot of heat on the social media.

It said she is "extremely sensitive" to the situation and will reach Mathura soon but insisted that the issue should not be used as a "diversion" as law and order is the state government's responsibility and not that of the local MP.