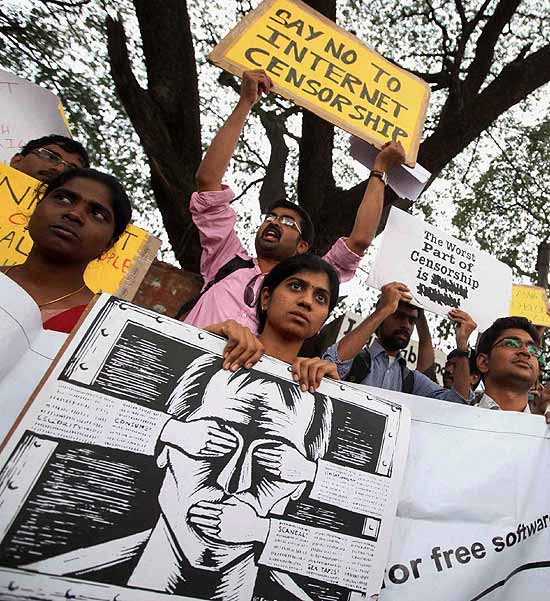 People wear masks as they protest against the Government's alleged restrictive regulation of the internet in Bengaluru.
PTI PHOTO/ SHAILENDRA BHOJAK

outlookindia.com
-0001-11-30T00:00:00+0553
Internet activists held protests in several cities against what they claimed as 'growing censorship of internet by the government' in the country.

Held under the banner of worldwide group of web hacking activists 'Anonymous', youngsters wearing 'Guy Fawkes' masks held protests in 16 cities including Bangalore, Pune and Chandigarh, the group claimed on their website.

The demonstrations come in the wake of a March 29 court order in Chennai asking 15 Indian Internet providers to block access to file-sharing websites such as Pirate Bay.

In New Delhi, a group of about 50 people gathered near the historic Jantar Mantar, which has also been the site of protest by Anna Hazare and Baba Ramdev.

"Without Internet, people cannot be liberated. Internet penetration is already low in the country and it (government) is putting a cap on this as well," said one of the activists.

Holding banners, the members of the group raised slogans like, "Raise your voice, save your voice."

"With censorship of Internet, the government is taking us back wards," added another participant.

Many others are supporting the campaign online through various forums like blogs and social networking websites.

There were reports of low turnout at various locations. A supporter, however, tweeted: "Astonished that people focusing on "low turnout" for #opindia. Really? One month ago no one knew them. Today, several cities have protests."

Earlier in the day, Anonymous attacked the websites of CERT-In and Government of India, though later in the day, the portals became operational.

"www.Cert-in.Org.In and www.India.Gov.In are our targets... India.Gov.In was down till afternoon. We will be hitting it again after today's protests," the Group said.

CERT-In is the national nodal agency for responding to computer security incidents.

The 'hacktivists' have threatened to disrupt websites of various government departments in their protest.

Earlier this week, on June 6, the website of state-run telecom company MTNL was disrupted by 'Anonymous' to protest against "censorship" of the internet.

MTNL's corporate website could not be accessed for over four hours following the attack, but its individual city-specific websites (for Delhi and Mumbai) remained unaffected.

As per a Facebook page of the protesters, "It is a campaign against Web censorship in India". It alleged that the Indian Government was "attempting to control Internet space through unlawful means".

The government has been embroiled in a row with social networks after a series of meetings were held with internet giants Google, Yahoo! and Facebook to discuss how objectionable content can be pre-screened.

The protesters said the governments across the world want the United Nations to formulate policies for use of Internet.

They also raised slogans like "United by One, Divided by Zero".

A German national who was participating in the protest said, "Anonymous also works for social causes like stopping people from running child pornography websites. Last time they made the list of all such offenders public. Anonymous is a paradox. We are all from Anonymus and yet none of us are from Anonymous."

Another activist said, "The masks that we are wearing is not to cover our faces but to show that we may be different in religion and facial appearance but identical in views and thoughts."