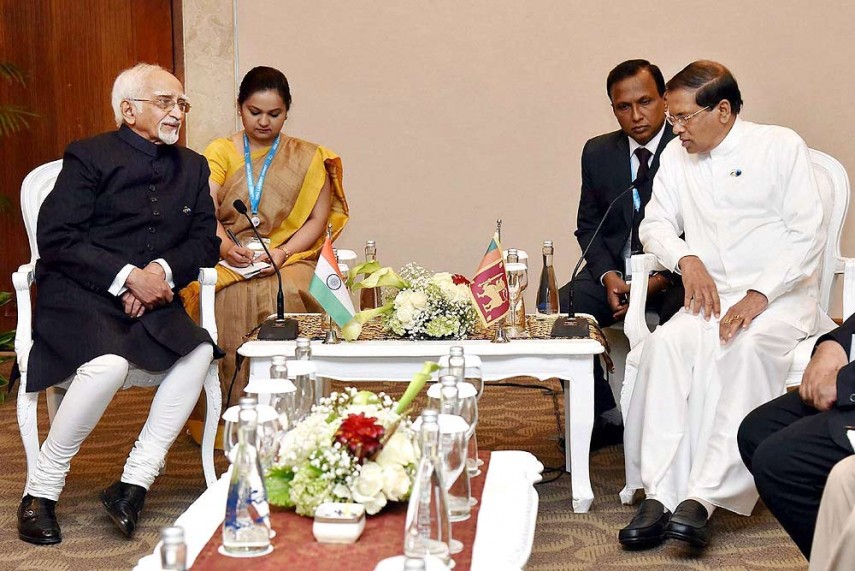 The issue of killing of an Indian fisherman allegedly by the Sri Lankan Navy was taken up by Vice President Hamid Ansari with its President Maithripala Sirisena who told him that he has ordered a thorough probe into the incident.

Ansari raised the issue during a bilateral meeting with Srisena in Jakarta yesterday on the sidelines of the Summit of Indian Ocean Rim Association (IORA).

"Yes, it was discussed," the Vice President had said when asked whether the killing of the Tamil fisherman allegedly by the Sri Lankan Navy figured in his meeting with Srisena.

Ansari, during his interaction with the accompanying media persons while returning from Jakarta after a two-day visit last night, said, "The President said he had heard about it this morning and that he had spoken to the Chief of the Sri Lankan Navy who had said that no such incident from the side of the Sri Lankan forces took place."

He said Srisena told him that he has ordered "full investigation" into the matter.

Sources told PTI that the Vice President had candidly conveyed to Srisena that something must be done by Sri Lanka about the recurring problem related to the Tamil fishermen as part of confidence-building measures.

The 22-year-old fisherman was shot dead yesterday while he was fishing in a mechanised boat at a short distance off Katchatheevu islet. Fishermen in Tamil Nadu alleged that he was killed by the Lankan navy while another was injured.

Apart from this incident, as many as 76 Indian fishermen are in captivity of Sri Lanka.

The incidents related to the Tamil fishermen have been leading to rise in passions in Tamil Nadu off and on.