'Are These The Ones Hurting You,' Putin Asks Trump Pointing at Journalists, He Says Yes 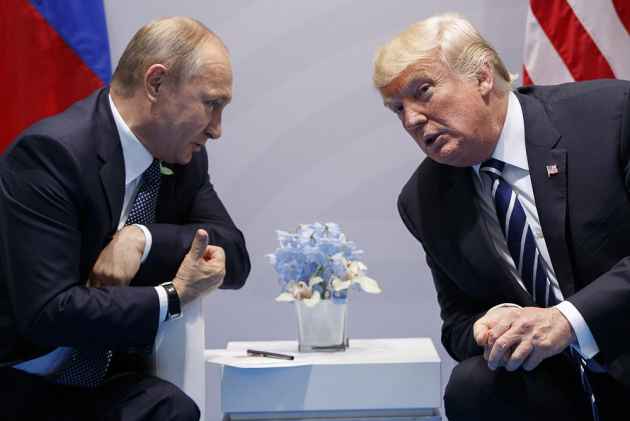 Print
A
A
A
increase text size
Outlook July 08, 2017 12:55 IST 'Are These The Ones Hurting You,' Putin Asks Trump Pointing at Journalists, He Says Yes

US President Donald Trump and his Russian counterpart Vladimir Putin flagged off their first meeting by lashing out at the reporters present to cover the 'highly-anticipated' one-on-one entourage.

As the meeting progressed, it appeared as if Putin was sympathetic towards the scenario, as he was perceived to be defending Trump against attacks from the media, reports the Independent.

Ahead of their meeting o the sidelines of the G20 Summit in Hamburg, the Russian President during the Photo op gushed to Trump saying "These are the ones hurting you?" while pointing towards the journalists at the venue.

Responding to this, Trump said, "These are the ones. You're right about that."

The same was tweeted by CNN Chief National Security Correspondent Jim Sciutto?, with a video captioned "these are the ones who insulted you?' Putin to Trump as he points to reporters".

"These are the ones who insulted you?" Putin to Trump as he points to reporters https://t.co/vxx8qcDkRp

President Trump, in the recent past, has time and again launched scathing attacks at the media for misquoting him, referring to them as "fake news" and "the enemy of the American people".

On Friday, President Trump slammed mainstream media for not writing accurately about him and covering him negatively, but said he will fight for his country's interests.

Trump tweeted, "I will represent our country well and fight for its interests! Fake News Media will never cover me accurately but who cares! We will #MAGA!"

I will represent our country well and fight for its interests! Fake News Media will never cover me accurately but who cares! We will #MAGA!

Adding to his string of attacks launched against the media, he recently posted a GIF depicting him body-slamming a man with a CNN logo superimposed on his head. He also called a female journalist 'crazy" and "dumb as a rock," and accused her of "bleeding badly from a facelift". He has also reportedly suggested jailing journalists who leak classified information.

President Trump had called on Putin to discuss the prevailing situation of Syria, in their first face-to-face meeting.

U.S. Department of State Rex Tillerson informed the media persons before departing for the G20 summit that Russia has been given the major role to solve Syrian crisis and decide the fate of Syrian President Bashar al -Assad.

The United States and Russia have already achieved progress in establishing de-confliction zones in Syria that have prevented mutual collateral damage.

"The United States is prepared to explore the possibility of establishing with Russia joint mechanisms for ensuring stability, including no-fly zones, on the ground ceasefire observers, and coordinated delivery of humanitarian assistance. If our two countries work together to establish stability on the ground, it will lay a foundation for progress on the settlement of Syria's political future," Tillerson stated.