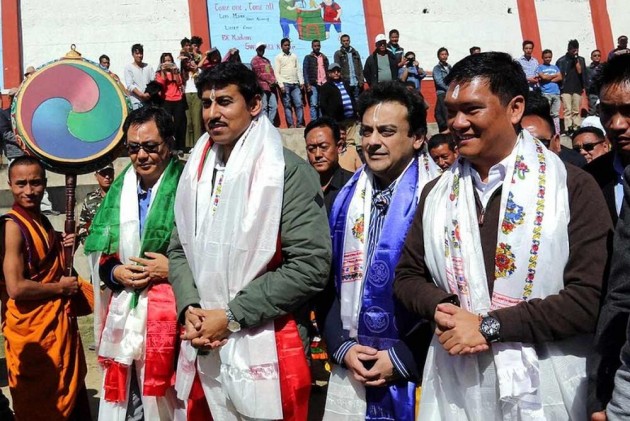 Print
A
A
A
increase text size
Outlook December 31, 2016 16:07 IST Arunachal Pradesh Gets BJP Government After CM Pema Khandu Leads 32 Others To Party

In a dramatic development, BJP formed a new government in Arunachal Pradesh today with 33 MLAs of PPA led by Chief Minister Pema Khandu joining the party, two days after he was suspended by his own party that triggered another round of political maneuvering.

Khandu, a former Congress leader, paraded the 33 of the 43 MLAs of Peoples' Party of Arunachal (PPA) before Assembly Speaker Tenzing Norbu Thongdok who recognised them as BJP members in a House of 60. BJP has 11 MLAs.

The PPA, an alliance partner of the North East Democratic Alliance (NEDA) government in the state, yesterday selected Takam Pario as the new chief minister.

However, on a day of fast paced developments the political equation changed when majority of the PPA MLAs who initially extended support to Pario, later shifted their allegiance to Khandu. Khandu broke away from the Congress along with 42 lawmakers in September this year.

"Lotus has finally bloomed in Arunachal. The people of the state will see a new dawn of development in the new year under the new government," Khandu told reporters in the Assembly premises.

The PPA accused the BJP of hijacking its MLAs to instal its government in the state.

"The NEDA convenor instead of coming to the state to resolve the ongoing crisis went to Kenya. He should have deputed somebody to sort out the differences between the MLAs of the party," Bengia said.

"The PPA is not comfortable with NEDA in the state and we are going to discuss the issue with other constituent members of the alliance soon," PPA central working committee (CWC) Chairman Kamen Ringu said while supporting Bengia.

Elaborating on the decision to merge with the BJP, Khandu said that circumstances compelled the MLAs to take the decision in the interest of the people and the state.

"After several years of Congress misrule we observed that there was no visible development in the state. We joined the PPA with the intention to take the state to progress and prosperity, but there too, we find similar condition where the party president treated the MLAs undemocratically.

"So with focus on development, our MLAs decided to join the BJP for overall progress of the state," the chief minister said.