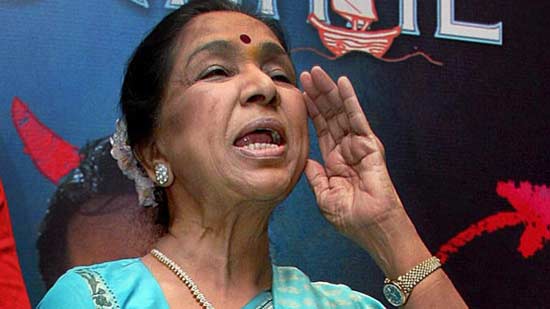 Asha Bhosle says she wants to see her granddaughter become a playback singer like herself and is already in the process of preparing her.

12-year-old Zanai is Bhosle's son Anand's daughter and she has already made her singing debut in 2013 film Mai, which starred the legendary crooner.

Bhosle also shared the stage with Zanai at a music award show early this year.

"I have done everything I want in life- singing, acting, TV shows, stage shows. I also recently walked the ramp during a fashion show. I think my next target is to groom my grand-daughter as a playback singer.

"She has a very wonderful voice- a mixture of mine and Lata didi. I want to prepare her as a singer myself," Asha said, while attending an event organised by the Young FICCI Ladies Organisation in the capital.

Reflecting on the current scenario in the Hindi film music industry, the 81-year-old singer said she sometimes feels annoyed when she hears outrageous lyrics in songs of today like 'Halkat Jawani', 'Munni Badnaam' and 'Lungi' among others.

"Item songs have become a fashion now. I think there is a scarcity of good lyricists. I find songs very gibberish. But then there are also songs like 'Jab Se Tere Naina' and some by Pakistani singer Rahat Fateh Ali Khan," she said.

Bhosle also opened up about the hardships she had to face early in her career when she had to make her way in the film industry through established singers like her sister Lata Mangeshkar, Shamshad Begum, Noor Jehan and Geeta Dutt.

"The challenges that I had to face during my early years were humongous. There were many established singers and it was difficult for me to get into the industry. So, I decided to change my style of singing.

"'Eena Meene Deeka' was the first song I sang trying the new style.. Although the old people criticised me a lot, I had found many fans and that is how it started," she said.