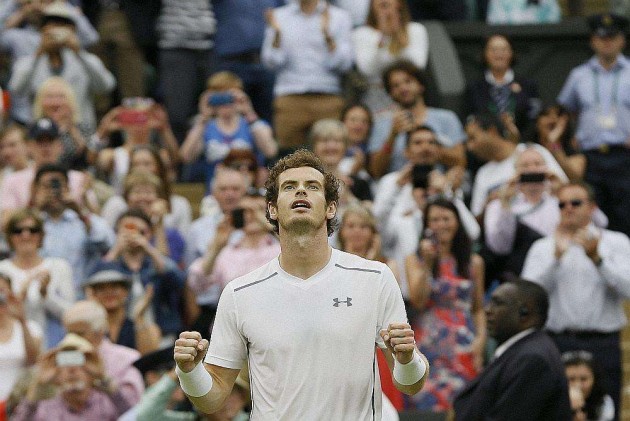 Andy Murray twice fought back from a set down to win a gruelling five-setter against injury-hampered Milos Raonic today and reach his latest Australian Open final against five-time champion Novak Djokovic.

Djokovic has already beaten Murray in three Australian Open finals and the world number one will get the advantage of an extra day's rest after he knocked out Roger Federer in four sets in Thursday's semi-final.

It will be Murray's ninth Grand Slam final as the Briton, up against the dominant Serb once again, chases an elusive third major title after winning the US Open in 2012 and Wimbledon in 2013.

"It was tough because he (Raonic) didn't miss one first serve in the (third set) tiebreaker and he has one of the best serves in tennis," Murray said.

"I started to get a better read on his serves as the match went on as I was making a few more returns, that was the key."

It will also be the first time two brothers have played the singles and doubles finals at the same Grand Slam after Jamie Murray reached the men's doubles final with his Brazilian partner Bruno Soares.

Andy Murray's win over Raonic was the 28-year-old Scot's fourth win in seven encounters with the much-improved Canadian, who slowed in the final set and completed the match grimacing from a right groin injury.

"That's something I've learned over the years of playing. When I'm playing a match, I'm not thinking about what he was going through," Murray said of Raonic's plight.

"I'm just trying to use what he's giving me on the court and try to make adjustments to my game if needs be.

"Obviously if the injury affected him significantly at the end, then that's tough, especially at this stage of an event.

Murray broke Raonic's big serve four times, twice in the fifth set, and hit 38 winners, while Raonic served up 23 aces among his 72 winners, but made 78 unforced errors.

Raonic, who has gained composure and purpose under the coaching of Carlos Moya, began confidently, breaking Murray to love in the opening game of the match, and he went on to take the first set in 36 minutes.

The Canadian was jamming up Murray with his serving to his body, but the world number two finally broke his serve in the 12th game of the second set to level the semi-final 7-5.

In the third, Raonic comfortably held his serve and had break point on Murray's service in the 11th game, only for the Scot to hold on.

But the Canadian played a strong tiebreak, hitting two return winners and he brought up two set points which he clinched with an ace to take a 2-1 sets lead in a tense match.

Raonic left the court for treatment for a right groin injury at 1-2 in the fourth set.

Murray broke the Canadian for the second time in the match in the seventh game, with Raonic wincing in pain. He sought treatment from the trainer again at another changeover.

The fired-up Scot fought off two break points and then locked up the match on his second set point to take the semi-final into a fifth set.

Raonic was broken in the opening game of the final set and he slammed his racquet twice into the court at the changeover, breaking the frame, as his frustrations boiled over.

Wounded Raonic bravely resisted but Murray broke a second time to steam home against the under-powered Canadian and set up a fifth attempt to win the Australian title.