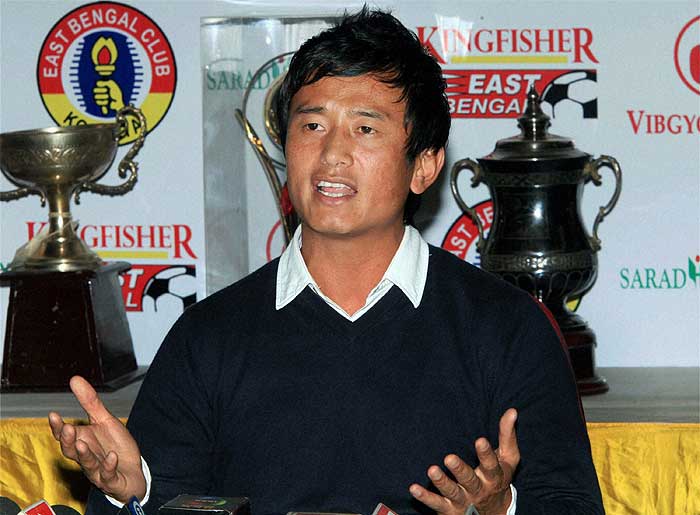 The 34-year-old, known as the 'Sikkimese Sniper' for his shooting skills, announced his decision at a press meet at the All India Football Federation headquarters here.

"I had fantastic 16 years of international football. I enjoyed every moment to have represented the country, to have contributed to the game," Baichung said.

Speculation had been rife on the imminent retirement of the talismanic striker, who pulled out of India Under-23 side's tour of England where they will play against Pakistan and England Under-23 next month.

He was struggling with injuries in the past one year and could play for just 15 minutes in the Asian Cup in Qatar in January, the most prestigious event India has ever taken part in the last 27 years.

"Winning the AFC Challenge Cup in 2008, to qualify for the Asian Cup were the best moments of my career and I thought of retiring after playing in that tournament," he said.

"But I could play only 15 minutes in the Asian Cup and I thought it was not the right way to retire. I wanted to continue playing but the last 7-8 months have been frustrating due to lot of injuries. So I have decided to quit," he added.

He was dropped from the Indian squad selected for the 2014 World Cup qualifiers and the preparatory matches but named in the Under-23 team for the England tour.

Baichung, however, will continue to play for his club United Sikkim FC which he founded.

"Lots of things in life do not happen the way we wish so I am quitting from international football but will continue playing for my club," he said.

"My commitment and contribution to Indian football will not diminish and I am ready to help the AIFF in whatever way they want me," he said.