BJP Claims To Have Majority In Manipur, Legislature Party Leader To Be Elected Today 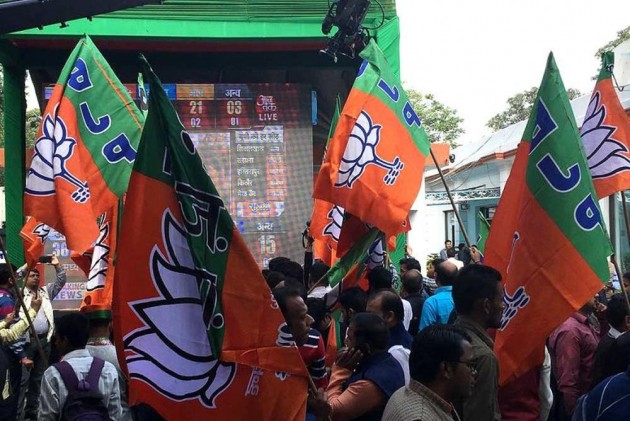 Print
A
A
A
increase text size
Outlook March 13, 2017 09:29 IST BJP Claims To Have Majority In Manipur, Legislature Party Leader To Be Elected Today

The BJP in Manipur tonight claimed to have secured the support of 32 MLAs after getting the backing of NDA constituent parties and two other MLAs, and said it would elect the legislature party leader tomorrow.

BJP has its own 21 MLAs and secured support of 11 others adding up to 32 legislators. 31 are needed to form government in the 60-member Assembly, Assam minister Himanta Biswa Sarma said after meeting Governor Najma Heptullah.

A delegation of BJP and parties supporting it called on the Governor but it was not clear what transpired in the meeting.

Shyamkumar, one of the 28 Congress MLAs who won from Andro constituency, and the lone All India Trinamool Congress legislator Robindro joined the BJP taking the party's numbers to 32, Sarma said.

Asked about application of the anti-defection law against Shyamkumar, Biswa Sarma said they have kept that in mind.

Earlier, BJP national general secretary Ram Madhav said, "We have been able to come to an understanding with the NPP and LJP in our bid to form the government in Manipur."

NPP and LJP representatives were present along with their winning candidates in Madhav's press conference.

Madhav said that the party also has an "understanding" with another NDA partner Naga People's Front which has won four seats.

So, after the support of NPP, NPF, LJP, Trinamool Congress and the Congress' one MLA, the BJP has support of 32 MLAs including its own 21.

Madhav said that yesterday the NPF had issued a press statement wherein it said it was willing to form a non-Congress government in Manipur.

The NPP's Conrad Sangma said that the popular verdict was for a change in Manipur.

On being asked who would be the chief minister in the event of the BJP forming a coalition government, Madhav said the party leadership would decide soon.

Manipur yesterday threw up a hung assembly with the ruling Congress bagging 28 of the 60 seats and the BJP winning 21.

Continue FREE with Ads Pay Rs. 1 to Read Without Ads
READ MORE IN:
Ram Madhav National
Next Story : Manohar Parrikar To Be Sworn In As Chief Minister Of Goa Tomorrow
Download the Outlook ​Magazines App. Six magazines, wherever you go! Play Store and App Store