BJP Not Anti-Muslim, Centre Working on Schemes for Them: Mukhtar Naqvi 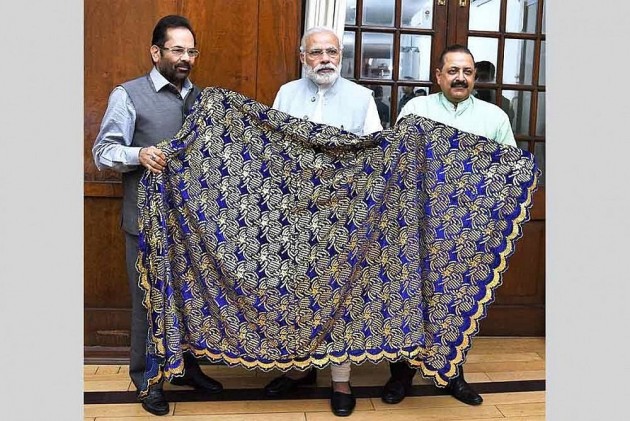 Print
A
A
A
increase text size
Outlook April 18, 2017 15:52 IST BJP Not Anti-Muslim, Centre Working on Schemes for Them: Mukhtar Naqvi

Union Minister Mukhtar Abbas Naqvi today condemned the opposition parties for terming the BJP as "anti-Muslims", while rejecting doling out more reservation to the community saying the demand has no "constitutional" merit.

The Minister of State (independent charge) for Minority Affairs said the Muslim community has indicated that they will not let the anti-BJP forces "mislead or befool" them for "political benefits".

Naqvi said the central government is working on programmes for establishing education and skill development facilities for the community and trying to get more industries set up to generate more employment opportunities.

"There are schemes being launched for backward classes and that does not mean Muslims would not avail the benefits of the programmes because more than 50 per cent of the backward population consists of Muslims," he told PTI.

"Muslims will get the major share of the development programmes," he added.

Naqvi lashed out at the opponents who have been demanding reservation for the community, claiming the demand was "not based on legal or constitutional ground".

He said for the districts having domination of Muslims the government has prepared a road map to establish polytechnics, IITs, educational institution right from primary level to higher standards and Garib Nawaz Skill development centres besides Sadbhawna Mandaps (goodwill generating centres) each with an investment of Rs 10 crore.

He said Prime Minister Narendra Modi is touring places within and outside the country exploring avenues to attract business and industries in India.

"Modi is not a PM but a Fakeer," Naqvi remarked.

On opposition parties' claims that alleged tampering of EVMs led to BJP's victories in recent assembly elections, Naqvi said, "The Congress had formed government at the Centre twice and Mayawati, Akhilesh (Yadav), Mamata Banerjee and Arvind Kejriwal formed governments in their respective states using the same EVMs but none raised an eyebrow against the election commission then."

On BSP supremo Mayawati and SP chief Akhilesh Yadav's apparent keenness to form a grand alliance to fight against the BJP, Naqvi said, "When the patriarch of the SP, Mulayam Singh, has opposed the move and the Congress too, so far, wishes to keep away from any said alliance, how the opponents would succeed in their endeavour."

"Moreover if a few patients join hands to combat a wrestler they would again bite dust in the arena of democracy," he said, adding, "Long live the pita-putra klesh (referring to spat between Mulayam and Akhilesh)."

"A person of Rampur has been habitual of spewing poison... It is not a hidden fact that the people pf Rampur experienced utmost zulm (atrocities) during the last five years.

Continue FREE with Ads Pay Rs. 1 to Read Without Ads
READ MORE IN:
Mukhtar Abbas Naqvi National
Next Story : President, Ministers May Have to Give Speeches in Hindi
Download the Outlook ​Magazines App. Six magazines, wherever you go! Play Store and App Store