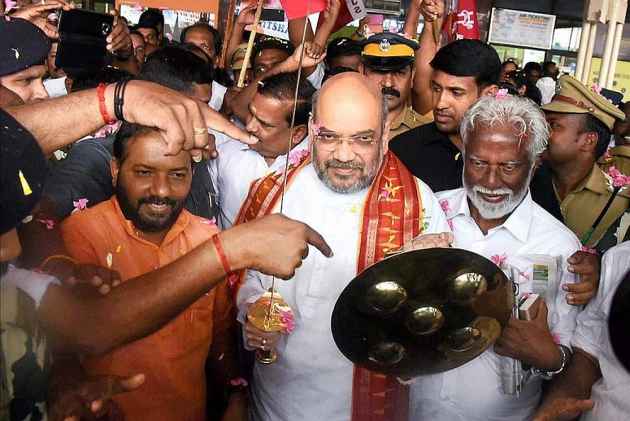 According to a source in the Shiv Sena, Shah told Thackeray that Prime Minister Narendra Modi would decide the NDA's candidate for the highest constitutional post.

To this, the Sena chief said they would take a call on support after the BJP reveals its choice for president, the source said.

Shah, along with Maharashtra Chief Minister Devendra Fadnavis, visited Thackeray's residence 'Matoshree' and held a close-door meeting, which started around 10 am and lasted nearly 75 minutes.

BJP state unit chief Raosaheb Danve, who had gone to Thackeray's residence, and senior Sena MP Sanjay Raut, a close aide of the party president, were not part of the meeting.

According to the source, during the meeting Shah appealed to the Sena to support the BJP's nominee for the president's post.

However, Thackeray said he would like to know the name of the ruling party's candidate before deciding on its support in the July 17 presidential election.

The source said, "Shah said the name of the candidate would be announced by Narendra Modi. We are hopeful of receiving Shiv Sena's support.

"Thackeray told Shah that his party should declare the name then only the Shiv Sena can decide whether to extend the support."

The meeting comes a day after the BJP chief, who is here on a three-day visit to strengthen the party organisation in the state, said his party would consult its allies before finalising the NDA's presidential candidate.

The Shiv Sena, the BJP's oldest ally, had earlier said it may choose an "independent" path in the election to the highest constitutional office.

It had backed Congress nominees -- Pratibha Patil and Pranab Mukherjee -- in the last two presidential elections.

The Sena, which has often been critical of the BJP and the Modi government, recently suggested the name of M S Swaminathan, the father of India's Green Revolution, for President.

Asked about Fadnavis' remark that the BJP was prepared for snap Assembly elections, in an apparent reference to the continued strain in ties with the Shiv Sena, Shah yesterday said, "What he meant was that if mid-term polls are forced on us, we are ready to fight."

On the recent farm loan waiver announced by the Maharashtra government, Shah had said through it the state was offering relief to farmers.

"The burden of loan waiver will be on the government and not banks," he had said.

Continue FREE with Ads Pay Rs. 1 to Read Without Ads
READ MORE IN:
Amit Shah Uddhav Thackeray National
Next Story : Tur Dal in Stock but HRD Refuses to Include It in Mid-Day Meal, Says it Will Increase Cost Per Student
Download the Outlook ​Magazines App. Six magazines, wherever you go! Play Store and App Store