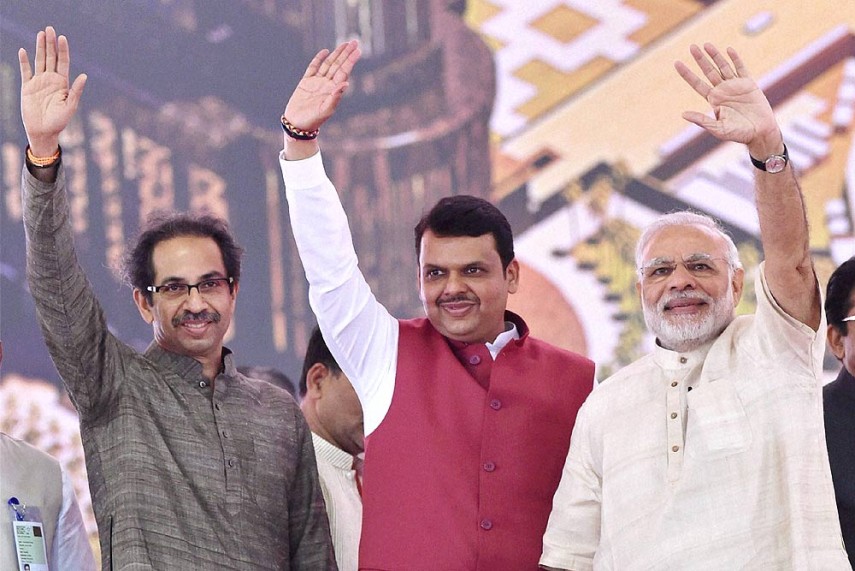 Capping days of aggressive posturing that marked uncertainty over forging of ties with BJP for upcoming civic polls including BMC, Shiv Sena chief Uddhav Thackeray today announced his party would go solo but remained non-committal whether it would continue as a junior alliance partner in the NDA government.

Reacting to the development, Chief Minister Devendra Fadnavis said the "change" will happen in state irrespective of whoever comes along with BJP, while state unit president asserted that state government will complete its full term.

In a combative speech aimed at galvanising his party workers, Thackeray raked up the controversy over replacement of Mahatma Gandhi's photos with Prime Minister Narendra Modi's on calenders of Khadi Udyog.

"I have not received any call from any senior leader in BJP. Shiv Sena is 50 years old; however, the 25 years of our time in alliance (with BJP) is rotten one. We always hailed you (BJP) on Hindutva issue. However, Sena is not born for the sake of power. Whoever tries to underestimate Sena, we will ensure they will be uprooted," he told the gathering of party workers and leaders at suburban Goregaon.

Blaming BJP for "insulting" Sena, he said, "Sena will not go for an alliance in upcoming civic elections. We will unfurl the bhagva (saffron) flag in Maharashtra all alone."

While Sena is a junior alliance partner in the NDA governments at Centre and in Maharashtra, it is a ruling party in the cash-rich Brihanmumbai Municipal Corporation, where it has been in power with the BJP for over two decades.

Thackeray said Sena needed foot soldiers who had the "courage to launch a frontal attack, instead of indulging in "back-stabbing".

"Once I have taken the decision, I do not want anybody to question it. If you promise to stand by me, I have taken the decision to do it alone in Maharashtra. I will not go to anybody with a begging bowl for alliance and will not be at anybody's mercy. I have decided there will be no alliance for any of the coming municipal corporation or zilla parishad polls," he said evoking huge applause.

Referring to recent protests in Tamil Nadu, he said the next month's polls are no less than 'jallikattu' where "a bull needs to be tamed" once and for all.

The last straw on the fate of alliance came when Sena whittled down BJP's claim to contest 114 out of total 227 seats for BMC to mere 60.

The talks for the civic polls dragged on as both the parties engaged in muscle-flexing over seat-sharing formula.

Elections to 10 municipal corporations, including Mumbai, Pune, Nashik and Nagpur, would be held on February 21. Elections to 25 zilla parishads will be held in two phases, on February 16 and February 21. "When you talk of transparency, we expect a similar transparency in the state government and at the Centre," Thackeray said in an apparent reference to the BJP's demand of "transparency" in the functioning of the Sena-controlled BMC.

He also took a swipe at the BJP without naming it for inducting "goons" into the party.

Attacking the BJP-led central government, he said there was an "atmosphere of fear" in the country today as anyone who spoke against the ruling party was being branded as anti- national.

"Those who would have been in the dustbin had the Sena supremo (the late Bal Thackeray) not stood behind them in the past, have forgotten everything now," he said.

He also slammed the state government's recent order banning the celebration of religious festivals, pujas and pictures of deities in government offices, alleging that Sena ministers were not taken into confidence before issuing the circular.

BJP state unit president Raosaheb Danve said the state government will complete its full term as Thackeray has not said anything on Sena's continuance in the dispensation.

"The government is strong and will last its full term. We were keen for an alliance for the civic polls on the agenda of corruption-free and transparent administration. We are confident that BJP will win all civic bodies on its own," he said.

NCP supremo Sharad Pawar appeared to rub in when he said, "I am deeply pained as after working together for several years, they (BJP and Shiv Sena) have parted ways."

When asked about NCP's stand if Sena pulls the plug, the veteran politician said he did not answer hypothetical questions.

"They should take the decision and later should come for the discussion," he told reporters in Pune.

However, NCP spokesman Nawab Malik said it was up to Sena to decide whether to pull out of the Fadnavis government.

"We are ready for mid-term poll," he said, adding Sena's decision against forging a tie-up with the BJP was "pre-decided" and today's announcement was only a formality.

NCP was the first to announce outside support to the BJP when the results of the 2014 Assembly elections showed the BJP was emerging as the single largest party in state.

In an indication of likely political ramifications after Thackeray's announcement, Mumbai unit Congress chief Sanjay Nirupam said his party stood to gain from the "snapping of ties" and dared the Sena to withdraw support to governments at the state and Centre.

State Congress president Ashok Chavan said, "People know Congress is a better choice. Whether they (Sena and BJP) contest in alliance or separately, it is immaterial to us."

Continue FREE with Ads Pay Rs. 1 to Read Without Ads
READ MORE IN:
Uddhav Thackeray National
Next Story : Trump Defends His Plans On Restricting Entry Of People From Muslim Countries, Says It Was Necessary
Download the Outlook ​Magazines App. Six magazines, wherever you go! Play Store and App Store