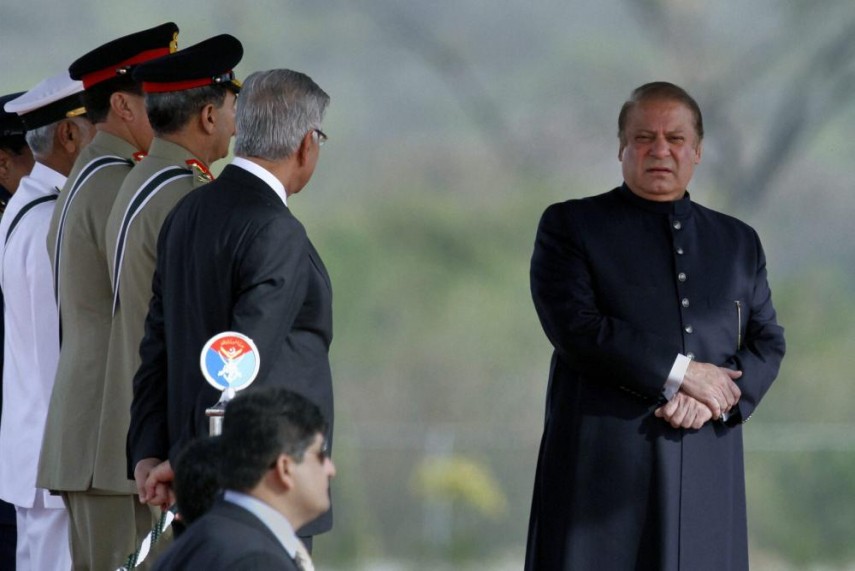 Raking up Kashmir at the UN, Pakistan Prime Minister Nawaz Sharif today glorified slain Hizbul commander Burhan Wani as a "young leader" even as he expressed readiness for a "serious and sustained dialogue" with India for peaceful resolution of all outstanding disputes, especially Jammu and Kashmir.

Sharif devoted much of his 20-minute speech at the UN General Assembly session to Kashmir and the current situation in the valley and said Pakistan "fully supports the demand of the Kashmiri people for self-determination".

He demanded an "independent inquiry into the extra- judicial killings" and a UN fact-finding mission to Kashmir "so that those guilty of these atrocities are punished."

Insisting that peace and normalisation between Pakistan and India cannot be achieved without a resolution of the Kashmir dispute, Sharif made a number of allegations with regard to the current unrest in the valley. India has blamed Pakistan for engineering and fuelling the unrest.

While talking about the situation in Kashmir, the Pakistan Prime Minister referred to Wani, who was killed in an encounter with security forces on July 8, as a "young leader" and said he has "emerged as the symbol of the latest Kashmiri Intifada, a popular and peaceful freedom movement..." (MORE) Sharif said the "Indian brutalities are well documented"

and that "Pakistan will share with the Secretary General a dossier containing detailed information and evidence of the gross and systematic violations of human rights committed" in Jammu and Kashmir.

"The Security Council has called for the exercise of the right to self-determination by the people of Jammu and Kashmir through a free and fair plebiscite held under UN auspices. The people of Kashmir have waited 70 years for implementation of this promise," he said, adding the Security Council must honour its commitments by implementing its own decisions.

Sharif, who spoke amid heightening tensions between India and Pakistan, insisted that his country wants peace with the neighbour as "confrontation should not be our destiny in South Asia."

The Pakistan Prime Minister claimed that he had "gone the extra mile to achieve this, repeatedly offering a dialogue to address all outstanding issues but India has posed unacceptable preconditions to engage in a dialogue.

"Let us be clear: talks are no favor to Pakistan. Talks are in the interest of both countries. They are essential to resolve our differences, especially the Jammu and Kashmir dispute, and to avert the danger of any escalation."

While insisting that peace and normalization between Pakistan and India cannot be achieved without a resolution of the Kashmir dispute, he said, "This is an objective evaluation, not a partisan position."

"Today, from this rostrum, I would also like to reiterate our offer to India to enter into a serious and sustained dialogue for the peaceful resolution of all outstanding disputes, especially Jammu and Kashmir," Sharif said.

He also said that Pakistan was "open to discussing all measures of restraint and responsibility with India, in any forum or format and without any conditions."

Pakistan is "ready for talks to agree on a bilateral nuclear test ban treaty," he added.

Claiming that Pakistan "neither wants, nor is engaged in an arms race with India", Sharif said, "We have consistently urged the conclusion of bilateral arms control and disarmament measures between Pakistan and India to prevent conflict and avoid wasteful military expenditures."

"The international community ignores the danger of rising tensions in South Asia, at its own peril," the Pakistan Prime Minister said.

He said Pakistan is "committed to the establishment of strategic stability in the region" but "we cannot ignore our neighbor’s unprecedented arms build up and will take whatever measures are necessary to maintain credible deterrence."

Sharif, while speaking about the unrest in Kashmir, said, "We demand the immediate release of all Kashmiri political prisoners; an end to the curfew; freedom for the Kashmiris to demonstrate peacefully; urgent medical help for the injured; abrogation of India’s draconian ‘laws’; and removal of the foreign travel ban on Kashmiri leaders."

To this end, he said, "steps should be taken by the United Nations to de-militarize Jammu and Kashmir and undertake consultations with India, Pakistan and the true representatives of the Kashmiri people to implement the resolutions of the Security Council."

In this context, Sharif said he welcomes "the offer of good offices by Secretary General Ban Ki-moon."

India has always maintained that Kashmir is a bilateral issue and not third party, including the UN, has any role.

He claimed that Pakistan is the "principal victim of terrorism including that supported, sponsored and financed from abroad" and has the resolve of eliminating the scourge.

"Our comprehensive strategy of law enforcement and targeted military operations has produced remarkable results and enabled Pakistan to turn the tide against terrorism," he said.

Sharif also made a pitch for Pakistan's membership of the Nuclear Suppliers' Group, claiming that it is a "responsible" nuclear weapon state.

"As a responsible nuclear weapon state, Pakistan will continue to cooperate with all international efforts that seek to promote fair and equitable solutions to disarmament and non-proliferation challenges," he said.

"We have introduced ‘state of the art’ measures to strengthen the safety and security of our nuclear materials and facilities. We have adopted a comprehensive export control regime that is fully consistent with international standards," the Pakistan Prime Minister said.

"Judged on the basis of objective criteria, and without discrimination, Pakistan is fully eligible for membership of the Nuclear Suppliers' Group," he said.

Sharif also talked about Afghanistan, which earlier alleged that "merciless" terror attacks against its civilians are being planned and organised in Pakistan which trains, equips and finances terror groups like Taliban and Haqqani network.

He said Pakistan has been "facilitating the process of reconciliation in Afghanistan" but "progress will be assured only when the Afghan parties themselves conclude that there is no military solution to the Afghan war."