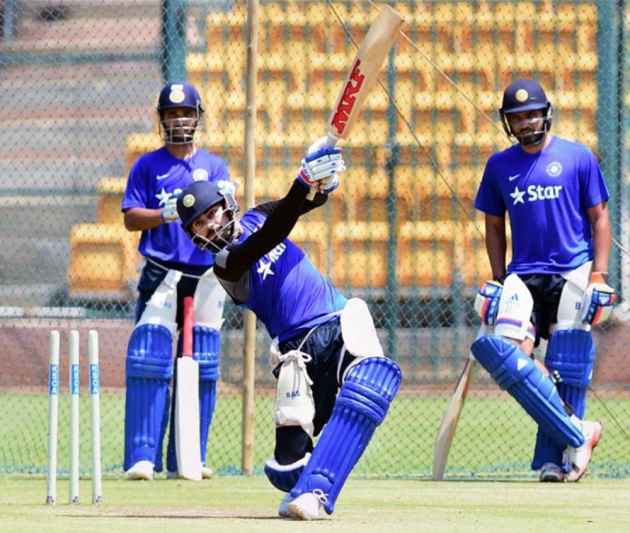 Virat Kohli will be facing the toughest battle of his nascent ODI captaincy career when defending champions India take on South Africa in a do-or-die virtual ‘quarterfinal’ of the ICC Champions Trophy, in London on Sunday.

Their confidence shaken after Sri Lanka effortlessly out-batted them in a high-scoring encounter, the Indian team and Kohli in particular will be keen to ensure that South Africa are continued to be known as “chokers.”

Call it irony, if India lose the game, it will be defending champions making an exit even before the semifinal.

If the Proteas lose, then the current No.1 ranked ODI side would be ousted before the last four stage.

A defeat will have the skeptics blaming the speculated off-the-field issues for the performance.

In such a backdrop, Kohli will be under huge pressure with margin of error being next to nil.

For AB de Villiers, it will be an opportunity to prove that self-imposed exile from five-day game has not affected his limited overs skills.

More so after knowing what can happen to Ravindra Jadeja when there is absolutely nothing in the strip.

Ashwin atleast has some natural variations, including the off-break which is his stock ball. The proud performer that he is, Ashwin will be smarting after being excluded in the first two games and it can only work positively in India’s favour.

However, skipper Kohli’s leadership acumen and understanding of the current situation will be under scrutiny depending upon the kind of playing XI he opts for the next game.

Ashwin’s entry into the playing XI looks logical but he certainly won’t replace Jadeja as two spinners are likely to play against the Proteas, who are not known to be comfortable against slow bowlers.

The other big factor is Jadeja’s electric fielding inside the circle and the powerful arm from anywhere at the boundary line. Jadeja can save at least 15 runs per match which makes him an useful player in this format.

Neither can Hardik Pandya be dropped as his pyrotechnics at No 7 is just what is needed from a batsman used as a floater in the order.

Jasprit Bumrah is another specialist bowler, who is a certainty in the playing XI, with his ability to bowl Yorkers at will at the death.

Therefore it will either be Bhuvneshwar Kumar or Umesh Yadav, who may have to make way for Ashwin.

In the second Powerplay overs during the Sri Lanka match, India had conceded over 200 runs, something Ashwin will be asked to check as a marauding AB de Villiers will be itching to score big.

All the top-order batsmen have got a decent hit including the opening duo of Rohit Sharma-Shikhar Dhawan, who conjured back-to-back century partnerships.

While both openers have been in good nick, there’s no denying that they have also consumed a lot of balls initially, which finally had an impact during the Lanka game.