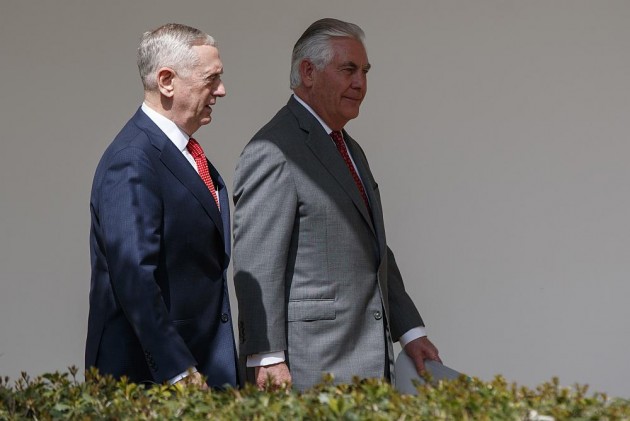 US Secretary of State Rex Tillerson has warned Russia to re-think its support to the Bashar al-Assad regime in Syria after a suspected chemical weapons attack on Khan Sheikhoun town left 86 people dead.

"There's no doubt in our mind that the Syrian regime under the leadership of Bashar al-Assad is responsible for this horrific attack, and we think it's time that the Russians really need to think carefully about their continued support of the Assad regime," he told reporters at the State Department here.

Last week Tillerson had said that the exit of Assad's government from Syria was not a priority for America.

However the use of chemical weapons on the people of Syria has changed the view of the Trump Administration.

Earlier, President Donald Trump said the suspected "horrible" chemical attack cannot be tolerated and it has crossed "many many lines".

He indicated to adopt a much tougher approach against the authoritarian Syrian regime, but did not gave any indication of what steps plans to take after the chemical attacks against innocent people.

Tillerson will make his first visit to Russia next week, as the Kremlin looks to improve ties with the Trump administration.

"The Secretary will travel to Moscow, Russia on April 12, where he will meet with Russian Foreign Minister Sergey Lavrov and other Russian officials to discuss the Ukraine, counter-terrorism efforts, bilateral relations and other issues, including the DPRK (North Korea) and Syria," State Department's acting spokesman Mark Toner said in a statement.

"This trip is part of our effort to maintain direct lines of communication with senior Russian officials and to ensure the US' views are clearly conveyed, including on next steps in Minsk implementation," Toner said.

The death toll from Tuesday's attack on the rebel-held Syrian town has risen to 86, 30 of them children.

"There were also 20 women among the dead and the death toll could rise further because there are people missing," the Syrian Observatory for Human Rights said.

Continue FREE with Ads Pay Rs. 1 to Read Without Ads
READ MORE IN:
Rex Tillerson International
Next Story : Air India Ticket Sales to US Up By 100 Per Cent After Luggage Ban On Flights From 'Muslim Countries'
Download the Outlook ​Magazines App. Six magazines, wherever you go! Play Store and App Store