Church Vandalised in MP Allegedly by Activists of Hindu Outfits 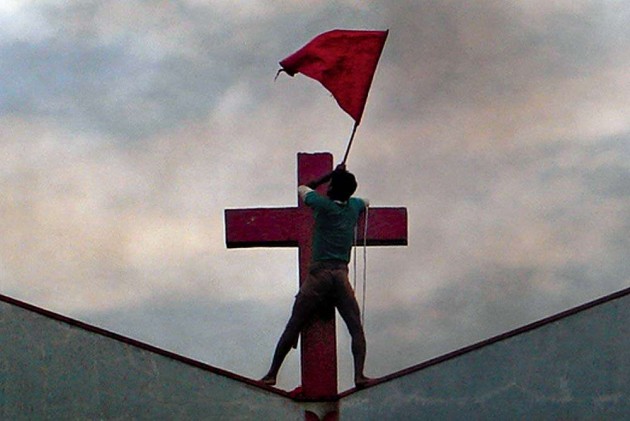 Print
A
A
A
increase text size
Outlook March 22, 2015 17:09 IST Church Vandalised in MP Allegedly by Activists of Hindu Outfits

A church and a school premises were vandalised and some members of the Christian community assaulted and threatened allegedly by activists of right wing Hindu outfits Dharma Sena and Bajrang Dal who accused them of carrying out conversion at Jabalpur in Madhya Pradesh.

Police have booked leader of Dharma Sena, Yogesh Agarwal, and some others in connection with the incident that took place on March 20, but no arrests have been made so far.

"Dharma Sena leader Yogesh Agrawal and Raju Rai and a few others have been booked under relevant sections of the Indian Penal Code and efforts are on to track down and arrest them," Jabalpur Superintendent of Police HC Mishra told PTI today.

The church authorities claimed that the attackers, who included activists of the Bajrang Dal, stormed into a Cathedral premises and a school housing a grotto with St Mary's idol, alleging religious conversion had been taking place there.

They broke earthen pots and and shattered glass panes of windows at the parsonage, accusing vicar Father Thankachan Jose of converting the Hindus to Christianity.

Ravi Francis, who claimed that he was present at the spot, said he was roughed up by a group of Dharma Sena and Bajrang Dal activists after they stormed into the Saint Thomas School campus where some people who had come to take part in a convention had been staying.

When Fr Thankachan and police officials were holding talks with leaders of the Hindu outfits to ease the situation, some activists belonging to these outfits stormed into the premises and started abusing them, he said.

Police then chased them from the school premises but they refused to give in and marched to the nearby Saint Peter and Paul Cathedral where the first day of the convention was held.

The activists then barged into the Cathedral premises shouting 'Jai Shree Ram' and demanded that Fr Thankachan be handed over to them. As they could not find him there, they vandalised the parsonage, close to the Cathedral, Francis alleged.

"They came to the Cathedral premises around 9 PM on March 20. They created such a scare that we had to hide ourselves till 4 AM of March 21, by when a large contingent of police had been deployed around the campus" he said.

"Though our Constitution guarantees freedom of religion, it is being violated openly," Fr Thankachan told PTI, adding that the church had given CCTV footage of the incident to the police.

Meanwhile, Jabalpur IG of Police D Sriniwas Rao told PTI that those indulging in unlawful activities would not be spared.

"We are going to arrest the accused soon," he added.