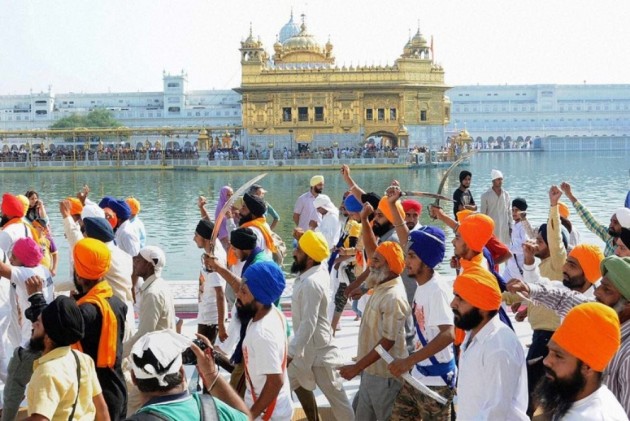 The UK's Opposition Labour party has called on British Prime Minister Theresa May to "come clean" about the role played by Britain in Operation Blue Star before her three-day visit to India starting tomorrow.

Labour party Deputy Leader, Tom Watson, said yesterday that Britain's Sikh community deserves to know the truth in the wake of allegations by Sikh Federation UK that the UK Foreign Office had removed files with "new evidence" of British involvement in the military operation on Golden Temple in June 1984.

"Before her visit to India, Theresa May must come clean about the role played by the UK in the attack on the Golden Temple in 1984 and subsequent events. There is increasing evidence that Margaret Thatcher’s administration worked more closely with the Indian government than was known at the time," Watson said in a statement.

His statement followed claims that the Foreign Office had intentionally removed files referring to the possibility of the Special Air Services (SAS) unit of the British Army being involved after "an Indian request for military assistance in the setting up of a National Guard for internal security duties" during Operation Blue Star.

While the Foreign Office said it had merely "borrowed" the files, the Labour party said the fact the files exist raise important questions.

Watson added: "David Cameron's previous inquiry failed to reveal the full facts and we now learn that vital new documents relating to the massacre have been removed from the National Archives by ministers. The revelation that these new documents exist suggest that Parliament may have been inadvertently misled by a former Foreign Secretary.

"After over 30 years of demanding answers, Britain's Sikh community deserves to know the truth, no matter how embarrassing it is for the current government. After the failure of the Cabinet Secretary’s internal inquiry, there should be a full independent investigation into these matters."

The Cabinet Secretary's inquiry refers to an official UK government inquiry in 2014 into the exact nature of British involvement in the Indian Army operation at the Golden Temple.

The inquiry had been ordered by then British Prime Minister David Cameron after documents released previously under the 30-year declassification rule had implied British SAS commanders had advised the Indian government as it drew up plans for the removal of militants from Golden Temple.

"The report concludes that the nature of the UK’s assistance was purely advisory, limited and provided to the Indian government at an early stage in their planning," William Hague, then UK foreign secretary, had told the House of Commons in February 2014.

Sikh Federation UK claims the latest note it found, marked confidential, was written on July 3, 1984, a month after the operation, which points to a more prominent British role.

The note was written by a civil servant in the Foreign Office’s South Asia department and copied to Ministry of Defence officials and the high commissioner in Delhi.

"The FCO (Foreign and Commonwealth Office) borrowed some of their files from 1984 that were released to the National Archives so they could read the content following concerns raised by the Sikh Federation. They will return all the files in full shortly," a UK government spokesperson said.