Clinton Calls For Prosperity For All At First Campaign Rally 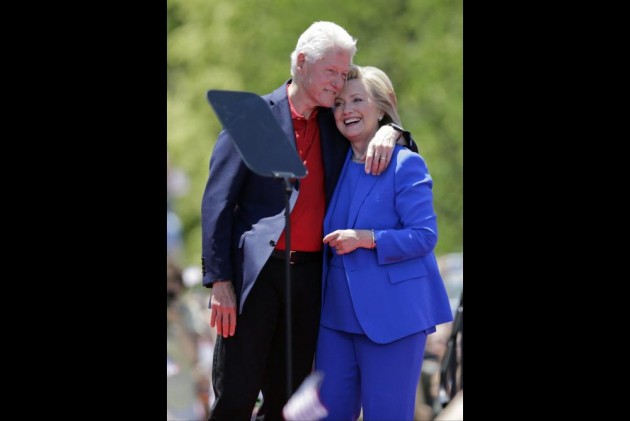 Print
A
A
A
increase text size
Outlook June 14, 2015 15:34 IST Clinton Calls For Prosperity For All At First Campaign Rally

Hillary Clinton formally launched her second bid to become the first woman president of the US by promising to reverse the gaping gulf between the rich and poor and do "whatever it takes to keep Americans safe".

"Prosperity can't be just for CEOs and hedge fund managers," 67-year-old Clinton told a crowd of 5,500 people during a rally held on Roosevelt Island here.

She used the first major rally of her second presidential run yesterday to declare that the goal of her presidency would be to tip the nation's economic scales back towards the middle class.

"Democracy can't be just for billionaires and corporations. Prosperity and democracy are part of your basic bargain, too. You brought our country back. Now it's time, your time, to secure the gains and move ahead. And you know what? America can't succeed unless you succeed. That is why I am running for president of the United States," she told the cheering crowd.

Her husband, former US President Bill Clinton, and their daughter Chelsea stood by in support. It was the first time that the family was seen together in public since Clinton began her campaign to become America's first woman president.

"I may not be the youngest candidate in this race but I will be the youngest woman president in the history of the United States and the first grandmother," she said in her 45-minute address.

The former secretary of state announced her campaign in April with a low-key rollout and has been holding listening sessions with voters in several states.

In a campaign in which Republicans have emphasised the growing threat of Islamic terrorism and an unstable Middle East, Clinton mentioned little about her foreign policy.

She spoke of her experience as a senator from New York after the September 11, 2001, attacks.

"As your president, I'll do whatever it takes to keep Americans safe," she said, weaving the skyline and a view of the newly built One World Trade Center into her remarks.

"I was in the situation room in the day we got bin Laden but I know we have to be smart as well as strong," she said.

"I believe the future holds far more opportunity than threats."

Paying homage to the legacies of former presidents, particularly Franklin Roosevelt, Clinton said, "We have new challenges in our economy and our democracy, we are still working our way back from a crisis because time-tested values were replaced by false promises."

"We are standing again but we all know we are still not running the way America should," Clinton said while pointing out how while Americans are sacrificing like never before, the wealthiest Americans are getting a greater share of the profits and benefits. To those who are wondering 'when will I get ahead,'" Clinton said, "I say now."

She said she will rewrite the tax code so it rewards hard work and investments here at home, not quick trades or stashing profits overseas.

"I will give new incentives to companies that give their employees a fair share of the profits their hard work earns. We will unleash a new generation of entrepreneurs and small business owners by providing tax relief, cutting red tape, and making it easier to get a small business loan," she said.

Clinton is seeking a Democratic presidential nomination to run for the White House in 2016.

This is her second presidential bid. In 2008, she lost in the Democratic Party primaries to current US President Barack Obama.