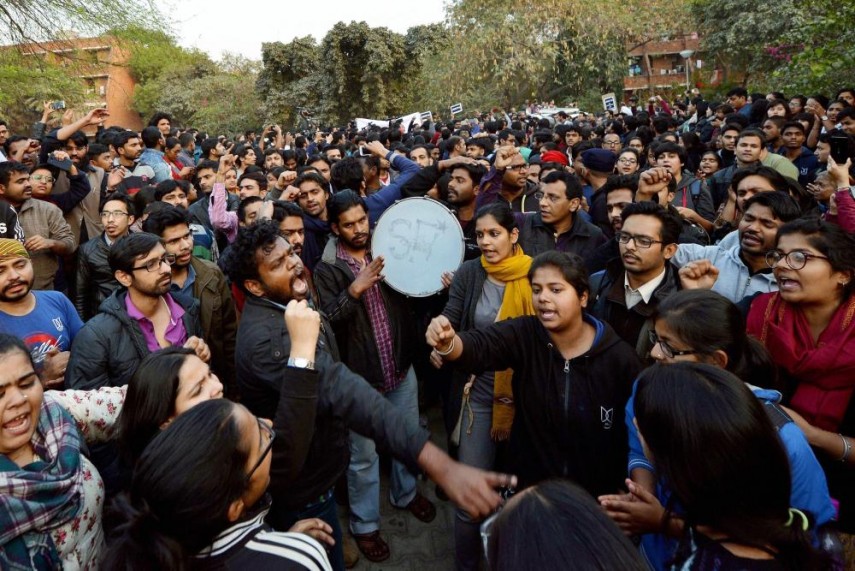 Print
A
A
A
increase text size
Outlook February 15, 2016 12:02 IST Cong Hits Back at Amit Shah for Targeting Rahul Over JNU Row

Hitting back at BJP chief Amit Shah for attacking Rahul Gandhi over the JNU row, Congress today said those once "externed by the Supreme Court over criminal charges" should not teach patriotism to the Congress, which has played a "stellar role" in freedom movement.

Party's chief spokesman Randeep Surjewala told reporters here it is ironical that those who are "inheritors of the thought process of Nathuram Godse" are giving new definition of patriotism and love for the nation.

He said it was "distressing and condemnable" that "those who helped British and sided with them" in the freedom movement and whose parent organisation RSS did not hoist the National flag at its headquarters in Nagpur were teaching nationalism to Congress.

Targeting Prime Minister Narendra Modi and former Prime Minister Atal Bihari Vajpayee, he alleged that those "whose quest for propagating personal leadership surpassed the interest of the Nation" and which led to the Kargil war first and then attacks in Dinanagar, Udhampur and finally Pathankot should not teach lessons of patriotism to the Congress party.

Surjewala also recalled the terror strike in Parliament and freeing dreaded terrorists like Masood Azhar in Kandahar during the Vajpayee regime.

Hitting hard at Shah, he said those once "externed by the Supreme Court over criminal charges" should not teach patriotism and love for the nation to his party.

Asserting that Congress had played a "stellar role" in the freedom movement with its leaders living and dying for the cause, he said it is also "great inheritor" of the ideology of Indira Gandhi who made supreme sacrifice for the nation.

He alleged that there was a pattern to the row in JNU which showed a "concerted conspiracy" of the Modi government and its attitude of "intolerance". He recalled the problems faced by students earlier at FTII, Ambedkar Periyar Centre and Hyderabad University where Rohith Vemulla committed suicide.

Seeking to dismiss criticism on the Afzal Guru issue, he said the party believed that Indian Union, 67 years after Independence, is strong enough that "we will give fair treatment and a fair trial to worst of our enemies and if that was not our belief and if that was not part of our founding ethos, then Afzal Guru terrorist would not have been convicted up to the Supreme Court and punished through due process".

Besides, he said that if this was not true, then Ajmal Kasab would not have been given a fair trail.

In a scathing attack on Rahul Gandhi over the JNU row, Amit Shah today said he had "proved" that national interest had no place in his mind and asked if the Congress vice president had joined hands with separatist forces and wanted another division of India.

Speaking on the raging controversy for the first time, Shah asked Congress president Sonia Gandhi and Rahul a host of questions and demanded that he apologise for his stand on the JNU issue, saying support to anti-national forces in the name of the Left's progressive ideology is not acceptable.

Surjewala said that when a handful of people raised anti-India slogans on the JNU campus, Congress strongly condemned it and demanded that action should be taken against them.

"But the truth is that Modi Government is suppressing the voice of democracy, the voice of freedom, the freedom of expression and voice of the young students and there is a pattern to it", he said.

He later dismissed as a slip of tongue his reference to Afzal Guru as 'Afzal Guruji' during the briefing. He said it should be taken null and void.

His clarification came in the wake of the BJP President seeking to make it a major issue.