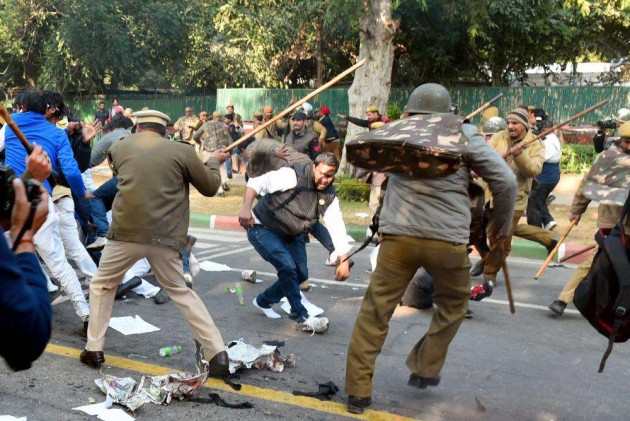 Congress today launched a sharp attack on the Modi government against land ordinance and accused it of effecting a "clampdown" on expenditure in agriculture, education and defence sectors to "mechanically make up" for rising fiscal deficit.

Party spokesperson Abhishek Singhvi dubbed the ordinance to effect changes in the land acquisition law as "land snatching, land grabbing ordinance" and alleged "it provides for corporates and takes away the heart and soul of the farmer friendly law."

He accused Prime Minister Narendra Modi of not acting acting against provocative speeches made by VHP and "undesirable" RSS leaders.

Former Union Minister Jairam Ramesh attended a meeting of farmers in Bhatta Parsual in Greater Noida from where Rahul Gandhi had launched an agitation on land issue in 2011, and Narendra Modi government of "snatching away all the rights" given to the people by the erstwhile UPA regime.

The land acquisition Act was a pet project of Rahul Gandhi and Congress is alleging that the NDA government has taken away its heart and soul through the ordinance.

At the AICC briefing, Singhvi targeted the government for "cut to the extent of 45 percent in disbursal of funds to the states under MNREGA", saying the NDA government did this "big slash" in job scheme's fund only because it was brought by the UPA government."

The party's all out attack against the government began today a day after Congress Working Committee resolved to carry out nationwide agitations against "wrong policies" of the NDA dispensation including the ordinance and Sonia Gandhi alleged a "polarization strategy" behind provocative remarks of Hindutva groups.

Singhvi also asked "is it the spirit of cooperative federalism", which the government talks about as he reeled out figures claiming that while more than 20 thousand crore rupees were disbursed by the Centre to states in eight months of the last financial year from April 2019 to to November 2013, the same during this period in the current fiscal has come down to Rs 13618 crore.

Singhvi also said there has been cut in the minimum support price of cotton and that a cotton farmer had also committed suicide in the BJP-ruled Gujarat.

Holding that the government is doing it to "mechanically cut down fiscal deficit", Singh alleged that a budgetary cut of 20 percent to the tune of Rs 6,000 crore was done in health sector and of this one third cut was in HIV prevention, over Rs 6,000 crore cut done in education sector and Rs 20,000 crore in rural development and sanitation.

"Now a cut of Rs 13,000 crore has been done in Indian Army, Airforce and Navy," Singhvi alleged wondering is this the way to control fiscal deficit.

"Controlling fiscal deficit does not mean you will take away the bread of the poor and hurt national security. Paradoxically it is coming at a time when prices of international crude oil have come down almost by half," he said.

Replying to questions about vandalism of a church in Vikaspuri in Delhi, Sinhgvi questioned "what is the motivation of the forces like Mohan Bhagwat, Ashok Singhal, Sadhvi Niranjan Jyoti and others now."

"These people existed even before May 2014, when the new government came to power. BJP district offices also existed. Why are these incidents recurring. From where is the confidence to these forces coming," he said, questioning the "eloquent silence" of the Prime Minister who speaks on every issue.