Countrymen Should File PIL Against Sibal for 'Lying': Kumar on Spectrum Scam 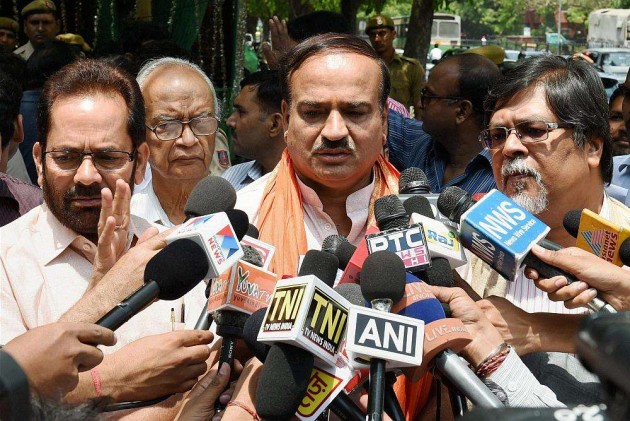 Print
A
A
A
increase text size
Outlook May 27, 2015 14:20 IST Countrymen Should File PIL Against Sibal for 'Lying': Kumar on Spectrum Scam

Union Minister for Chemicals and Fertilizers Ananth Kumar today asked countrymen to file Public Interest Litigation (PIL) against former Union Minister and senior Congress leader Kapil Sibal for "lying to the country in regard to the loss suffered on spectrum issue".

Alleging that Sibal had misguided the country by claiming a "zero loss" in the auction of spectrum, Kumar told a press conference here that a "transparent policy" adopted by the Modi-government, has helped the country gain Rs 1.10 lakh crores following the auction of the spectrum.

"I would like to ask any patriotic Indian to lodge a PIL against the former Union Telecommunication Minister for the lies", Kumar said.

The country, he said, had witnessed "rampant corruption" during the UPA rule but there was perceptible change recorded ever since a majority government headed by Modi assumed power.

He said the poorer section of the society, farmers and Agriculture sector were among the priority list of the Prime Minister, who have decided to issue Rs 15 crores of Soil health card among the farmers.

Besides, the government also has plan to set up 1150 soil testing laboratory across the country and improve the irrigation, power sector to ensure uninterrupted supply to the farmers community, he said.

Even Rs 75,000 crores subsidy on Urea and Fertilizers would also be spent on the agriculture sector and farmers community, he claimed.

Taking a dig at Congress for criticising the Modi government's performance, Kumar said the opposition was suffering from "lack of trust" even though the country was witnessing a systematic change in sector across.

The growth rate of the country was expected to become 7.4 per cent compared to previous UPA government, which had brought it down from 9 per cent growth achieved by the NDA government headed by Atal Bihar Vajpayee, he said.

Asking Congress to play a constructive role of an Opposition party, Kumar claimed that the Prime Minister has succeeded to seek commitment of 99 billion dollars investment during his 18-countries trip in one year time.