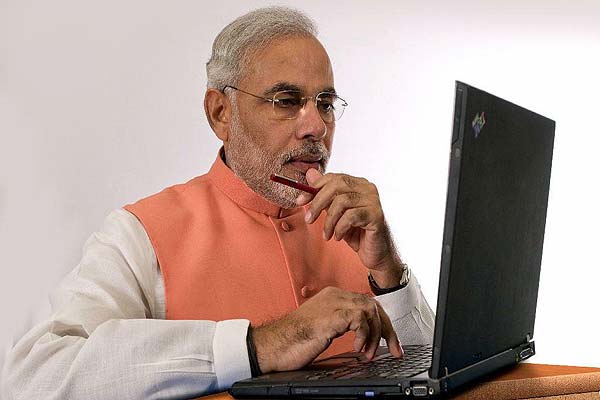 outlookindia.com
-0001-11-30T00:00:00+0553
The Gujarat polls are still eight months away. But the cyberspace has already become a battlefield between the supporters of tech-savvy Gujarat Chief Minister Narendra Modi, and his opponents.

Social networking sites like Facebook and Twitter, blogs, e-mails, websites, video uploading sites and every possible avenue on the internet is being used to attract the attention of the net-savvy, especially youths, towards Modi.

His opponents, chiefly the Congress, which calls him an 'internet manipulator' is not lagging behind this time in trying to match him on every step in the cyber space.

Also, some NGOs opposed to Modi have also been very active on the internet in the campaign against him.

The latest flash point between the two sides was the Time magazine online poll to select 100 most influential people list. Modi after being interviewed by the magazine was nominated for the top 100 and his name was put up for voting.

He was leading the positive votes for the first few days, and then his opponents swung into action and he ended up polling the most negative votes. He finished on third position, behind Anonymous, which is a group of hackers and Eric Martin, a champion of anti-piracy law, with more negative votes (2,66,684) than positive (2,56,792) - Modi in fact topped the list in negative votes. There were more people considering him as unsuitable than anyone else. The final results will be announced by the Time magazine on April 17.

"What the supports of the Chief Minister were doing was just a manipulation of internet to make him repositioned as one of the top influential leader of year. This was not a natural vote as we know that his supporters were manipulating it. So his opponents have voted against him as they have come to know reality of things in Gujarat," Congress spokesperson Manish Doshi said.

Speaking on the Congress' preparedness to counter Modi in cyber space Doshi said, "We have made functional an IT cell which works from morning 10 am to 8 pm in night from the Gujarat Pradesh Congress Committee (GPCC) office after our new president Arjun Modhwaida took charge. Their work is just to counter the propaganda of Chief minister Narendra Modi on the cyber space," Doshi said.

The IT cell which is being monitored by state Congress president Arjun Modhvaida, has been asked to make maximum use of social networking sites, upload our leaders’ speeches on YouTube, e-mail negative stories on Modi and BJP to large section of population, Doshi further said.

"We have recently re-launched Gujarat Congress website highlighting negative points of 10 years of misrule by Modi. We have also set up district unit IT cells to counter the propaganda of Modi at the district level," he further said.

Though the Congress has started doing all these things just recently, Modi’s cyber army has been doing such things from the last many years. Modi himself has a huge presence on the internet by way of his websites, Twitter account and blog. He has thousands of followers on his sites.

"State BJP has also decided to widely use the internet via e-mail, websites, and blogs to reach out to the youth of the state in the run up to the state elections," BJP's chief spokesperson of Gujarat Jagdish Bhavsar said.

"We recently held a meeting of our IT cell and have chalked out a detailed plan on how to carry out the cyber campaign for the upcoming elections. Party’s IT campaign will be different from what is being already done by those supporting Modi," Bhavsar said.

Some NGOs opposing Modi have also taken a cyber way by generating material against him on the net. They have also played an active role in the recent Time poll where Modi got more negative than positive votes.