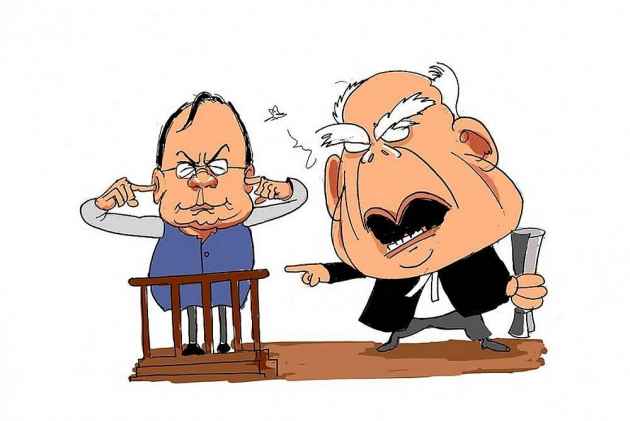 Print
A
A
A
increase text size
Outlook May 18, 2017 15:55 IST Defamation Case: HC Terms Jethmalani's Remarks Against Jaitley As Scandalous

The Delhi High Court today termed as "scandalous" certain remarks made by Arvind Kejriwal's lawyer Ram Jethmalani against Arun Jaitley during his cross examination in a civil defamation suit filed by the Union Minister.

Justice Manmohan said if such remarks were made on instructions of Kejriwal, then he should "first step into the box and make good his allegations" before continuing with Jaitley's cross examination.

"If such allegations have been made on instructions of Defendant 1 (Kejriwal), then no point in continuing with cross examination of plaintiff (Jaitley) any more. Let Defendant 1 make good his allegations. Let him step into the box," the judge said.

Jaitley's senior advocates Rajiv Nayar and Sandeep Sethi had raised the issue before the court saying they want a clarification from Kejriwal whether the remarks were made on his instructions or by Jethmalani on his own.

The remarks were made yesterday by Jethmalani before Joint Registrar Deepali Sharma when Jaitley was being cross- examined in the Rs 10 crore civil defamation case filed by him against Kejriwal and five other AAP leaders for accusing him of financial irregularities in the DDCA of which he was the President from 2000 to 2013.

The issue cropped up before Justice Manmohan who was hearing an application moved by Chadha for making amendments in his written submission filed in reply to Jaitley's plea.