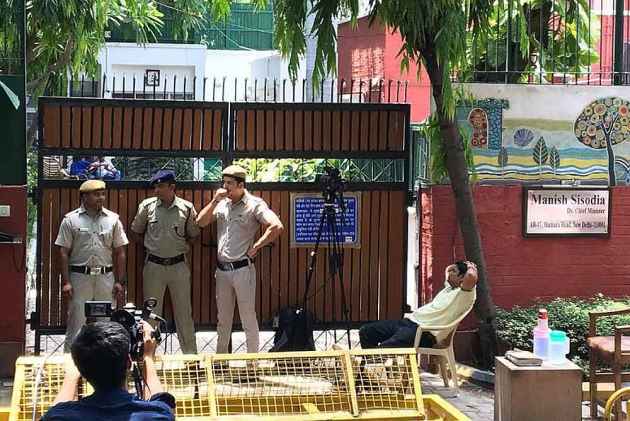 The Aam Aadmi Party today blasted the Centre for what it called a "raid" by the CBI at Deputy Chief Minister Manish Sisodia's residence, saying it signalled the BJP-led government's "resolve" to not let the AAP regime in Delhi work.

The CBI denied AAP's charge and said no "search or raid" was conducted at Sisodia's residence, which they said they "visited" earlier today in relation to a case.

AAP leader Sanjay Singh said instead of the "daily harassment", the Centre should simply suspend the Delhi government.

"Today's raid signals the resolve of the Centre to not let the AAP government work. The BJP wants to obliterate the opposition. The intention is to take revenge through relentless harassment," Singh told reporters here.

CBI officials said they had "visited" the residence of Sisodia to seek a clarification about a preliminary enquiry (PE) against him relating to alleged irregularities in a campaign launched by Chief Minister Arvind Kejriwal called 'Talk to AK'.

Singh said 'Talk to AK' was held using the services of a public relations (PR) company, which did not charge the government. He said no tender had been floated for the campaign -- a social media interaction with the public -- as platforms such as FB, YouTube and Google had no competition.

If it was not a "raid", as the CBI claimed, why did its officials visit the deputy CM's house, Singh wondered.

The CBI had registered the PE in January this year on the basis of a complaint filed by the Vigilance Department of the Delhi government.

It was alleged in the complaint that a consultant of a well-known PR company was hired by the Delhi government to promote the 'Talk to AK' campaign, AK referring to the chief minister's initials and that a Rs 1.5-crore proposal was prepared for this purpose.

"One may question why a PR company was chosen," another AAP leader, Sourabh Bharadwaj, told reporters here. "That's because the DIP (Directorate of Information and Publicity) was not capable of doing the job," he said.

The PR firm, he added, was already working for the government.

"It was empanelled. So naturally, the government approached the consultancy. We may not have gone for a tender, but the point is this company did not charge a commission," Bharadwaj said.

The complaint said despite objections from the Principal Secretary, the government went ahead with the proposal. The consultant spent money on the campaign, thereby creating a liability for the government.