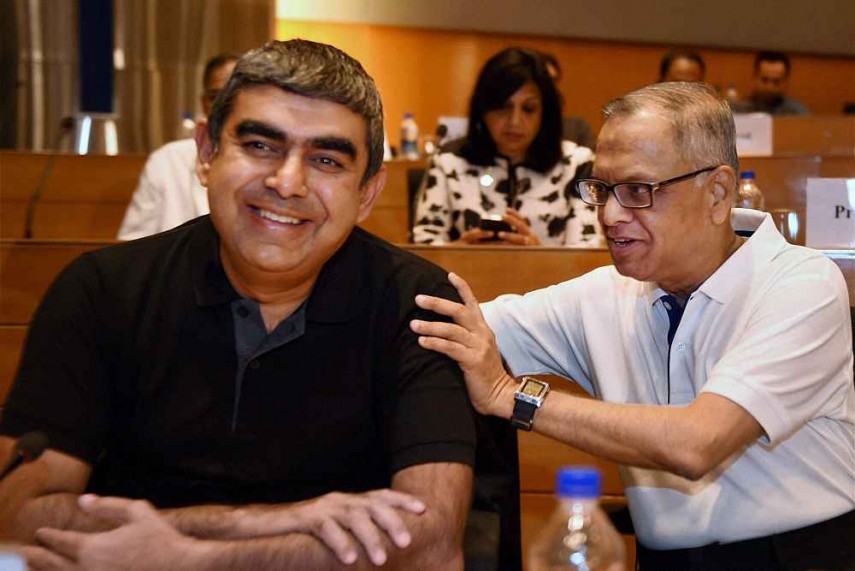 The comments come at a time when there has been a lot of buzz around some of the founders flagging concerns about governance lapses at Infosys and issues like hike in Sikka's compensation to USD 11 million and huge severance pay doled out to former executives, Rajiv Bansal and David Kennedy.

He added that he, however, hasn't met the other founders off late.

Describing Murthy as an "incredible man", Sikka said the two usually discussed topics like quantum physics and technology whenever they met.

"The other day he was telling me about the Paris Metro and how he worked on the Paris Metro in the 1970s before he started Infosys, and it had this whole ideas about automation and autonomous driving and all," he reminisced.

Sikka, speaking at Kotak's Chasing Growth Conference in Mumbai, said the "drama" going on in the media is very "distracting".

"It takes away our attention but underneath that, there is a very strong fabric that this company is based on. And it is a real privilege for me to be its leader," he added.

Sikka is scheduled to meet media representatives this evening along with some of the Board members.

Infosys, on its part, has denied any governance lapses and said it has made "full disclosures" on all developments.

Another issue that some of the former senior executives have raised is the huge cash pile of USD 5.25 billion that Infosys has.

Asked about his views on the matter, Sikka said his "official" answer is that the Board, from time to time, will consider capital allocation policies and when there is something to report, the company will do so.

"The unofficial answer is, you look at the circumstances over the next 4-5 years, what you need the capital for and then decide. In our case, it is the strategic growth initiatives, capital for building infrastructure and then acquisitions," he said.

Based on how that mix changes over the next 5 years, one takes a decision on how the cash is utilised, he added.

"I have a very deep heartfelt relationship with Mr Murthy and I took this job because of that relationship and respect. He knows, and I would like to assure every single shareholder that corporate governance and values were, are and will be the core foundation of this company. I will not let that standard slip even an iota under my watch," Sikka said.

Infosys Chairman R Seshasayee said: "I would like to thank Mr Murthy for his kind comments. I have the highest regard for him. His inputs are always taken with respect".