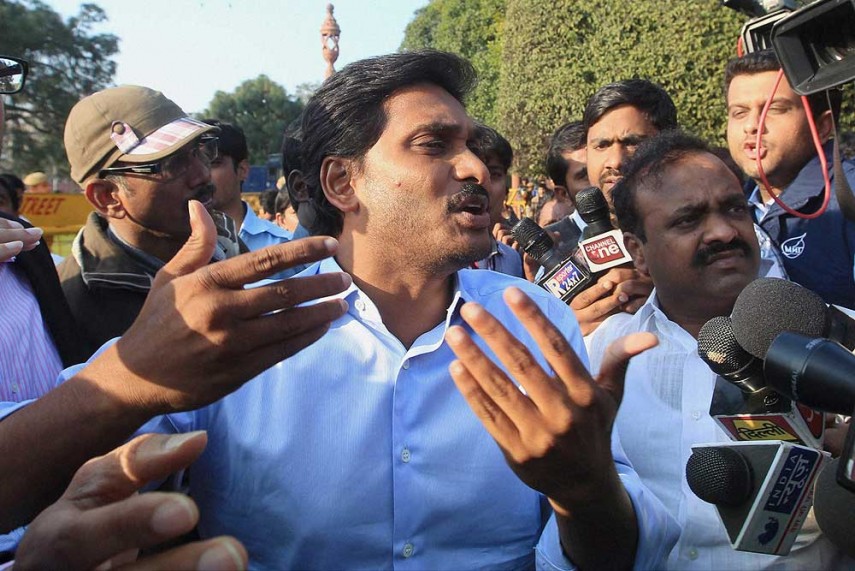 The agency launched the investigations on the basis of a charge sheet filed by the CBI accusing Jagan, son of then Andhra Pradesh Chief Minister YS Rajasekhar Reddy, of entering into a criminal conspiracy with others to get a mining lease allotted to M/s Bharathi Cement Corporation Private Ltd of which Bharathi is the chairman.

Jagan received bribes from various persons/companies in the guise of investments in his group companies as a quid pro quo for undue favours granted to them by the Andhra Pradesh government, the ED said in a statement here.

A case of laundering was registered against Jagan and others by ED's Hyderabad zonal office under the Prevention of Money Laundering Act (PMLA), 2002.

Apart from it, M/s Bharathi Cement Corporation Pvt Ltd has received the proceeds of crime in the form of limestone mined from the mines allotted illegally to them in Kadapa district by then AP government. The value of limestone works out to be more than Rs 152 crore during the relevant period, it said.

"During investigation under PMLA, the proceeds of crime involved in money laundering were identified in the form of movable (Rs 404,72,32,182) and immovable properties (Rs 344,38,10,378) totally valued at Rs 749.10 crore," ED Joint Director (Hyderabad Zone) S A Umashanker Goud said.

The attached properties are spread across Telangana, Andhra Pradesh and Karnataka.

In the past, the agency had attached properties worth several hundreds of crores belonging to Jagan and others.

CBI had filed 11 chargesheets against Jagan and others pertaining to the alleged investments made by various private firms and individuals to the tune of several crores in his businesse. The agency said this was part of quid pro quo arrangement in exchange for alleged favours by the erstwhile Rajasekhar Reddy government.

ED said according to its probe, M/s Bharathi Corporation Pvt Ltd did not have any major investments other than the investment made by Jagan Mohan Reddy and his associates till 2007.

But it received huge investments from Nimmagadda Prasad of VANPIC Group companies, N Srinivasan, Managing Director of M/s India Cements Ltd and Puneet Dalmia, Managing Director of Dalmia Cements Ltd through their companies between June 2007 and April 2010, with huge and unsubstantiated premium as quid-pro-quo, amounting to Rs 442.82 crore, ED says.

Before 2004, when his father Y S Rajasekhar Reddy became the Chief Minister of Andhra Pradesh, Jagan had not received any investment, the agency said.

He also got mining licence in the name of M/s Bharathi Cement Corporation fraudulently, and later sold the shares of Bharathi Cement to M/s Parficim S.A.S, France at Rs 671.20 per share and made "wrongful gain" of Rs 416.20 crore, ED said.

He retained 49 per cent stake in Bharathi Cement and appointed his wife as chairman.

The share sale proceeds were invested in other companies, construction, lands etc. "It is evident that Jagan, without investing any of his money and funds, reaped benefits of more than Rs 5,000 crore," ED said.

The attached properties include all "tangible fixed assets" of Utopia Infrastructure, Capstone Infrastructure and Harish Infrastructure such as land and a building at HUDA Heights in Hakimpet village here which is known as Lotus Pond House.

They also include assets of Shalom Infrastructure such as Sakshi Towers at Banjara Hills in Hyderabad, the ED statement added.