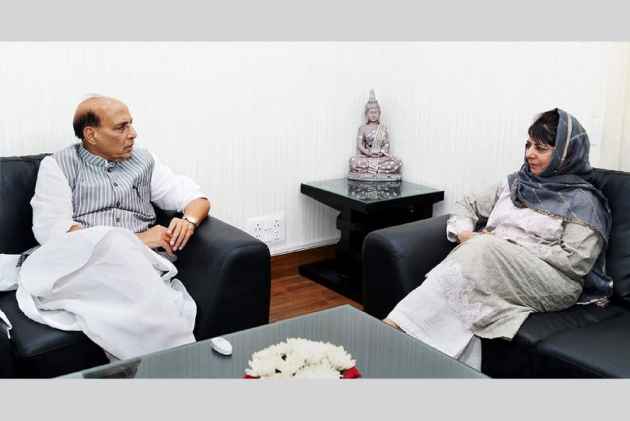 Jammu and Kashmir Chief Minister Mehbooba Mufti today met Home Minister Rajnath Singh to discuss the law and order situation in the state, especially security to Amarnath pilgrims, even as she blamed "external forces" for creating trouble in the state.

During the meeting that lasted nearly an hour, the chief minister apprised the home minister about the steps taken to maintain peace in the Kashmir Valley, officials said.

Steps taken to ensure the security of Amarnath pilgrims were also discussed, they said.

"Kashmir issue is not a law and order problem. It is happening because of external forces. The ongoing fight is a handiwork of external forces and now unfortunately China is also trying to meddle into it," Mehbooba told reporters emerging from the meeting.

The chief minister said he had discussed with the home minister the attack on Amarnath pilgrims.

"The attack was designed to create communal tension in the country. But I am grateful that the entire country, political parties and the central government especially the home minister helped us in overcoming the tragedy," she said.

Seven pilgrims were killed by militants in Anantnag district while returning from the Amarnath cave shrine on Monday.

Security agencies engaged in anti-militancy operations in Jammu and Kashmir have been told to implement security plans with full vigour, officials said.

So far, more than 1.86 lakh pilgrims have visited the high altitude Himalayan shrine.

As many as 21,000 paramilitary personnel in addition to state police forces and two battalions of Army have been deployed for security of the pilgrimage routes.

The number of paramilitary personnel deployed this year is 9,500 more than last year.

Four districts of the state -- Pulwama, Kulgam, Shopian and Anantnag -- have been on the boil since the killing of Hizbul Mujahideen commander Burhan Wani in an encounter with security forces on July 8, 2016.

The unrest has resumed since the April 9 bypoll to the Srinagar Lok Sabha seat.

Mehbooba said the Jammu and Kashmir government had requested the central government for ensuring that Article 370 should not get diluted as it has an emotional connect with the people of the state.

"I am happy that the president in his order has reiterated that special status granted to the state would not be diluted.