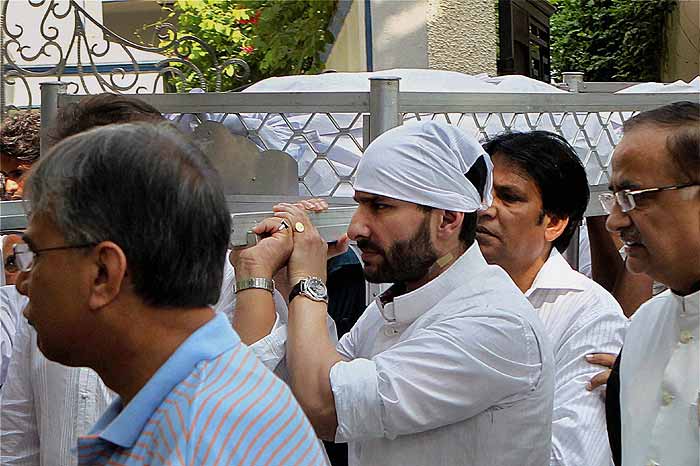 The body of Mansur Ali Khan Pataudi is carried by his son Saif Ali Khan during his funeral in New Delhi.
PTI Photo/ Kamal Singh

Pataudi, who was 70 when he breathed his last at the Sir Ganga Ram Hospital in Delhi, was buried next to the grave of his father, Iftikhar Ali Khan Pataudi -- the last ruling Nawab of Bhopal.

As distraught family members, bid final goodbye to the man who was fondly called 'Tiger', there was chaos at the Pataudi Palace's sprawling campus with close to 15,000 people converging at the burial site to catch a glimpse of the proceedings.

The huge police presence was hardly a deterrent as media and the gathered crowd jostled to be the closest to the grave even as the Pataudi family grieved in silence.

Pataudi's wife, yesteryears' Bollywood star Sharmila Tagore, looked calm and composed when she came on the palace balcony once along with other female family members.

From the cricketing fraternity, former captain Kapil Dev and Ajay Jadeja came with the family from Delhi this morning when Pataudi's body was brought here.

The funeral procession of Pataudi began from his home in Delhi with several celebrities paying their last respects.

The body of the former captain, who would forever be remembered for leading India to their maiden Test series triumph abroad, was brought to his Vasant Vihar residence early this morning.

Among those who came to pay their last respects in Delhi were Pakistan High Commissioner Shahid Malik with his wife and Punjab Cricket Association chief I S Bindra.

Delhi Chief Minister Shiela Dikshit, and BJP leader Arun Jaitley also paid their respects to Pataudi, who led India in 40 of the 46 Test matches he played.

Hundreds had gathered outside the Pataudi residence in Delhi also including numerous mediapersons, who even got into an argument with the policemen over the coverage.

Former Haryana Chief Minister O P Chautala also came to pay his respects but the procession had left for Pataudi by that time.

Pataudi, regarded as one of India's finest captains, scored 2793 runs in 46 Tests at an average of 35 and made six centuries, the biggest of which was an unbeaten 203 against England in Delhi in 1964.

Pataudi, who lost his right eye because of an accident, played 46 Tests between 1961 and 1975 and was arguably India's greatest captain. He was given the leadership in his fourth Test, when he was 21, in Barbados in 1962, because the regular captain Nari Contractor was in hospital after getting hit on the head by Charlie Griffith.

Pataudi, who was also known for his amazing sense of humour, was the youngest Test captain, a record that stood until 2004. He also captained Sussex and Oxford University.

Under Pataudi's captaincy, India won nine Tests but it was he who instilled the belief in the team that it could win international matches.

"I am distressed to have learnt of the demise of legendary cricketer Mansur Ali Khan. He was a dashing and daring captain, who brought a new confidence to the Indian cricket scene," he said in a condolence message.

"Even after his playing days were over, he remained an iconic figure, an embodiment of poise and polish and a great advocate of sportsmanship," Singh said.

The Prime Minister conveyed his "heartfelt sympathies" to Patudi's wife Sharmila Tagore and members of his family.