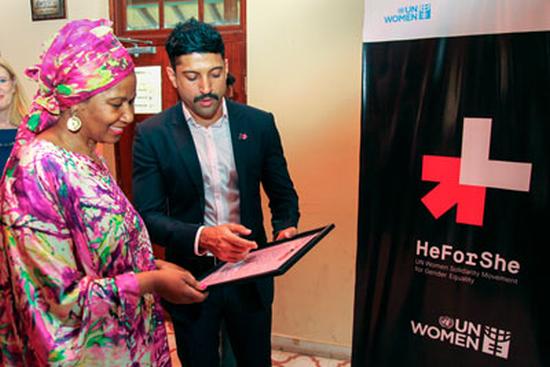 Bollywood actor-director Farhan Akhtar today became the first man in UN Women's history to be appointed as its Goodwill Ambassador for South Asia.

In his new role, the 40-year-old actor will serve as an advocate for UN Women's newly-launched HeForShe initiative in advocating for gender equality and women's empowerment.

"We are pleased and honoured to have Farhan as our Goodwill Ambassador for South Asia, for we believe his work and values represent the core values of UN Women," said UN Women Executive Director and Under-Secretary General Phumzile Mlambo-Ngcuka.

"Farhan started his own campaign, MARD - Men against Rape and Discrimination - that aims to sensitise men and create awareness about the safety of women. That kind of engagement is essential. We need creative and committed men like Farhan to push the gender equality and women's empowerment agenda.

"I am convinced that Farhan's passion and conviction for the cause will galvanise a multiplier effect and reach the hearts and minds of men and boys in South Asia and beyond," she said.

Farhan's campaign has encouraged many actors from the industry to join the campaign. He asked all men and boys to participate in eradicating gender inequality.

"I am honoured to serve UN Women as the Goodwill Ambassador for South Asia. This gives me and our MARD initiative an added impetus to work together towards a more gender equal India and world.

"I am a supporter of UN Women's HeForShe campaign and the role men and boys can play in stopping crime against women and girls, and working towards gender equality. Through this new partnership I want to call on all men and boys to be a catalyst for change and, through our actions, create a value system to end gender disparity," the actor said.