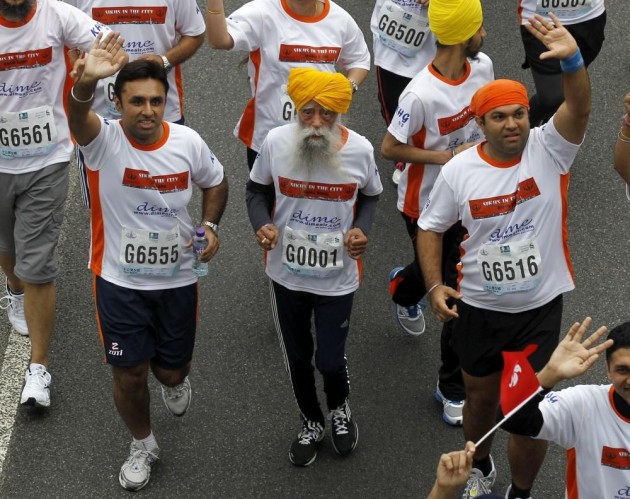 Singh, nicknamed the "Turbaned Tornado," finished the Hong Kong marathon's 10-kilometre race in 1 hour, 32 minutes and 28 seconds. But he could not meet his goal of beating his personal record of 5:40.

"I'm very happy. When I was running I felt very good, but now that I've stopped, I'm tired," the India-born British national, who only speaks Punjabi, said.

Singh, who turns 102 on April 1, became the oldest man to run a full marathon at Toronto in 2011. But his record was not recognised by Guinness World Records because he doesn't have a birth certificate to prove his age, only a passport.

Singh, who was a farmer in Punjab before settling in England, has competed in nine 26-mile marathons in London, Toronto and New York.

His best time was in Toronto, where he clocked five hours, 40 minutes and four seconds.

Singh says he does not suffer from any physical ailments. A torchbearer for the London 2012 Olympics, his one regret is not being able to speak and read English.

In 1999, at the age of 89, he decided to run marathons for charities. His first charity was for premature babies, and he billed himself as the oldest person running for the youngest.

However, Singh isn't too bothered about his age. His main aim in running the marathons is to raise money for charity.

"I will remember this day and I will miss it, but I will not stop running for charity," Singh said before the race.