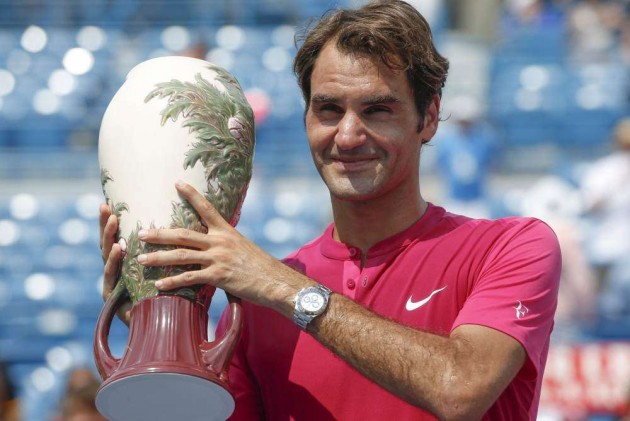 Roger Federer moved into pole position for a US Open title run, capturing his seventh Cincinnati Masters with a dominant 7-6 (7/1), 6-3 win over Novak Djokovic.

The 34-year-old Swiss star yesterday added the Serbian world number one to a victims' list which included Andy Murray in the semi-finals, capping a near-perfect week for the 17-time Grand Slam winner.

Federer was playing his first tournament since falling to Djokovic in the Wimbledon final.

He passed up the Montreal Masters won by Murray last week, preferring to rest and prepare at home.

"It's great, I didn't expect it, to be quite honest. I knew I had a chance, but I still felt more guys were going to have a better shot than I had because they had played Montreal before," Federer said.

"Usually that helps. But I've realized over all the years that it's just really difficult to win back-to-back Montreal and Cincinnati, or Toronto and Cincinnati.

"I chose to roll the dice a little bit and see how things were going to go. If they went great here then it was a great plan.

"If not, I was going to go back and practice and be really motivated for the US Open to start."

The gamble paid off for Federer, who needed 90 minutes to subdue Djokovic.

With the win he takes back the world number two ranking Murray seized for a week and will be seeded second behind Djokovic at Flushing Meadows for the season's concluding Grand Slam which starts on August 31.

Federer claimed his 87th career ATP title and his 24th trophy in a Masters 1000 event.

Djokovic, meanwhile, was thwarted in his bid to become the first man to win all nine of the elite Masters 1000 titles as he endured his fifth final defeat at Cincinnati -- the lone Masters missing from his resume.

The Serbian world number one has now fallen in the final of both of his tune-up events for the US Open, having lost to Murray in Montreal.

He didn't muster a break point against Federer, whose superiority was clear in the first-set tiebreaker.