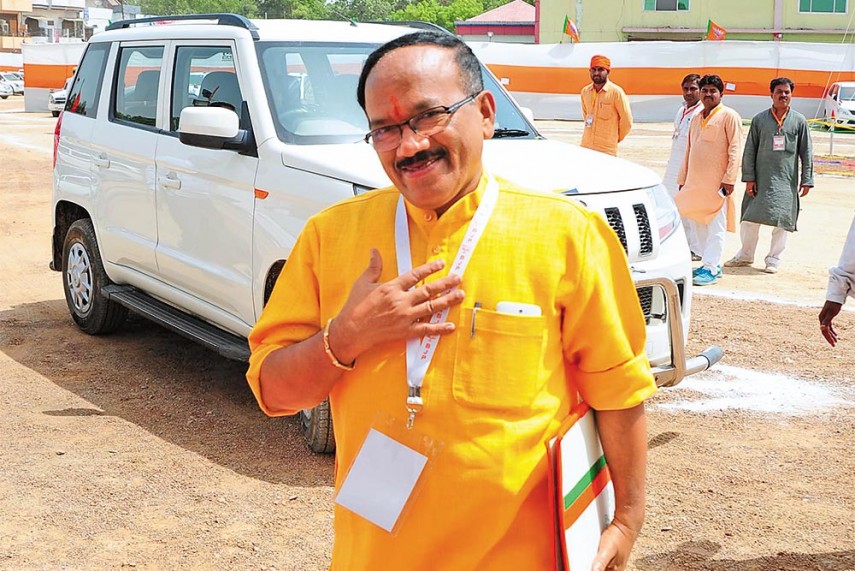 Goa Chief Minister Laxmikant Parsekar today said he dropped two MGP ministers from his Cabinet to prevent the BJP cadres from getting demoralised by their outbursts in the poll-bound state, even as the ally chose to continue support to the government, citing "coalition dharma".

Parsekar last night sacked Maharashtrawadi Gomantak Party's Sudin Dhavalikar and Dipak Dhavalikar from his Cabinet following their outburst against the BJP-led government, raising prospects of new equations emerging in state where elections are due next year.

"Dhavalikar brothers were sending wrong signals. They were continuously busy making allegations against us. My party cadres across the state were getting demoralised. I can tolerate anything but can't allow the party cadre to get demoralised," Parsekar told reporters.

"The party cadres are our asset. Due to this I had to take the decision. It is the prerogative of the chief minister but still I took into confidence the entire BJP team, including the higher-ups," he said.

Defence Minister Manohar Parrikar came in defence of  the Goa CM. "I feel that it is immoral to be in the Cabinet and make statement against the Chief Minister. They were sacked because they had no trust in the Chief Minister," Parrikar told reporters, following the removal of MGP ministers Sudin Dhavalikar and Dipak Dhavalikar from the state Cabinet.

He also said BJP's alliance with MGP in the state is continued and both the ministers were relieved from the Cabinet post as "they had no faith in the Chief Minister".

"The alliance with MGP is continued. What has happened (sacking of Dhavalikar) is a part of government's process, at party-level the alliance is on. The recent developments are hindrance to the alliance but it is not a deadlock," the former state Chief Minister said.

"From our side we have not terminated the proposal of the alliance, they can send the proposal and we will respond appropriately," he said.

Parsekar had held close-door meeting with Defence Minister Manohar Parrikar and state Forest Minister Rajendra Arlekar at his bungalow before dropping the Dhavalikar brothers from the Cabinet.

"The consultation with the BJP party leaders was going on till midnight yesterday when I wrote to the Governor recommending removal of both the ministers," the CM said.

Parsekar said he has high regard for MGP as one of the oldest political outfits in the state but it was being led by "wrong" people.

"I have high regard for MGP. Since my childhood I have witnessed the developments in the MGP, that is the party which took along common man with it," he said.

"But right now it is in the wrong hands. When we decided to give them ministerial posts, out of three MLAs, one Cabinet berth should have gone to their (third) legislator Lavu Mamlatdar, but both the brothers took the slots," Parsekar said.

"Even one of them (Dipak Dhavalikar) became MGP president. If that is the case what are other workers for? I am upset over how they are handling MGP. It is no more the party formed by Goa's first Chief Minister Dayanand Bandodkar. They have even changed their ideologies," he said.

"I want that a proper person should take over the party. This party is as much close to me as my BJP. They should change the leadership. I can only suggest it, finally it is their decision. I have a soft corner for the party," Parsekar said. Parsekar ruled out filling the cabinet berths left vacant by the Dhavalikar brothers.

"We are close to (Goa Assembly) election, anytime code of conduct may come into force. So I have decided to keep their portfolios with me," he said.

Despite being dumped from the cabinet, the MGP leaders said the party continues to support to the government as part of their "coalition dharma".

"We will abide by coalition dharma. Our support to BJP will continue till election code of conduct comes in force," MGP president Dipak Dhavalikar told PTI.

Dhavalikar said his party will fulfil the commitment it made towards the BJP when they forged a pre-poll alliance for the 2012 Assembly elections.

"Our support continues for the government. That is what I can tell you right now," he said.

Meanwhile, Parsekar said two Congress legislators are in talks with his party to join it.

"Some Congress legislators are in talks with us to join the party. But we can make a statement only when they resign from their party."

He, however, maintained silence on alliance with other parties for the upcoming polls.

"BJP has risen to this level from zero. Our voting share has been increasing for every election. Even when we were in the opposition party, we managed to increase our vote share. This time we are going to face the election based on our performance," he stressed.

"Inspite of all our financial limitations, we have executed infrastructure works in the state. We have completely utilised the borrowing limits to construct infrastructure in all the fields," the chief minister said.

"We will take along everyone who wants to be with us. We will also respect those people who want to come with us. But I am confident that on our own we will safely get the majority seats," he added.

Meanwhile, the NCP today made overtures to the MGP for a pre-poll alliance.

"It is a time for forces like MGP, NCP and Congress to come together and join hands to save the secular votes from being split in the ensuing assembly election. We propose that MGP should have pre-poll alliance with us," NCP Goa unit chief Jose Philip D'Souza told reporters.

The NCP party is willing to have a pre-poll alliance with MGP despite their ideological differences, he said.

"The move is to save the secular votes from being divided. The division of secular votes will give an edge to BJP in the coming polls," D'Souza said.

The NCP, which has no member in the Assembly, also decided to submit a memorandum to state Governor Mridula Sinha asking her to dissolve the Assembly or ask the Chief Minister to prove his majority on the floor of the House, claiming that the BJP in the state is a divided house.

"Without MGP, BJP is left with 21 legislators of its own (in 40-member house). But within BJP too there is a discord when it comes to Laxmikant Parsekar. Let BJP face the floor test and prove its majority again without MGP," he said.

D'Souza also accused the BJP of using regional parties as "tissue paper" for their political gain.