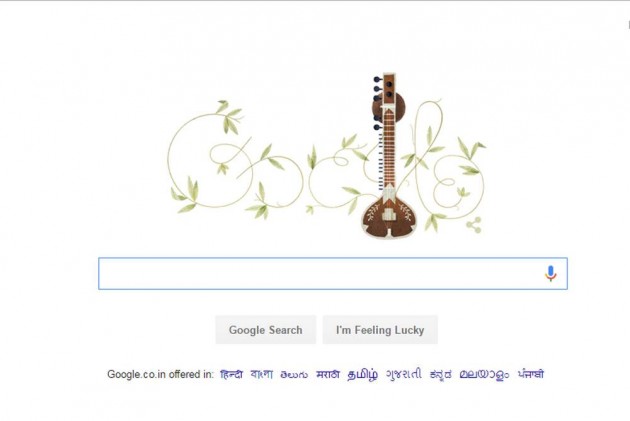 Google has honoured with a doodle Pandit Ravi Shankar, the sitar virtuoso who is credited with the spread of Indian classical music in the West in the 1960s.

Brought out in honour of Shankar's 96th birthday, the centrepiece of the doodle is a sitar.

"Shankar, evangelised the use of Indian instruments in Western music, introducing the atmospheric hum of the sitar to audiences worldwide," the search engine giant said.

Born Robindro Shaunkor Chowdhry in 1920 to a Bengali family in Varanasi, the musician and composer spent his younger days touring the country with his elder brother Uday Shankar's dance troupe.

He gave up dancing to study sitar playing under court musician Allauddin Khan. He went on to become the music director of All India Radio and the musician also worked as a composer, creating the music for the 'Apu Trilogy' by Satyajit Ray.

He performed frequently with the violinist Yehudi Menuhin, and composed a concerto with sitar for the London Symphony Orchestra. Shankar also taught George Harrison of the Beatles to play the sitar, and widely influenced popular music in the 1960s and 70s.

Shankar's music popularised the fundamentals of Indian music, including raga, a melodic form. Raga, as Shankar explained, has "its own peculiar ascending and descending movement consisting of either a full seven-note octave, or a series of six or five notes in a rising or falling structure."

"The distinctive character of Shankar's compositions attracted the attention of composer Philip Glass, with whom Shankar wrote the 1990 album Passages," Google said in a statement.

The legendary musician who passed away in 2012 at the age of 92 has been conferred with a Bharat Ratna, the Padma Bhushan and Padma Vibhushan.

At the centre of today's Doodle, by artist Kevin Laughlin, is a standing sitar, with two bridges, one for the "drone" strings and the other for the melody strings.

Laughlin's design shows the style of sitar Shankar played, which includes a second gourd-shape resonator at the top of the instrument's neck.

The doodle on Shankar has been viewed mostly in the US, Sweden, Kazhakasthan, Lithuania, India, Indonesia and Japan, according to the search giant, which makes fun, surprising, and sometimes spontaneous changes to the Google logo to celebrate holidays, anniversaries, and the lives of famous artists, pioneers, and scientists.