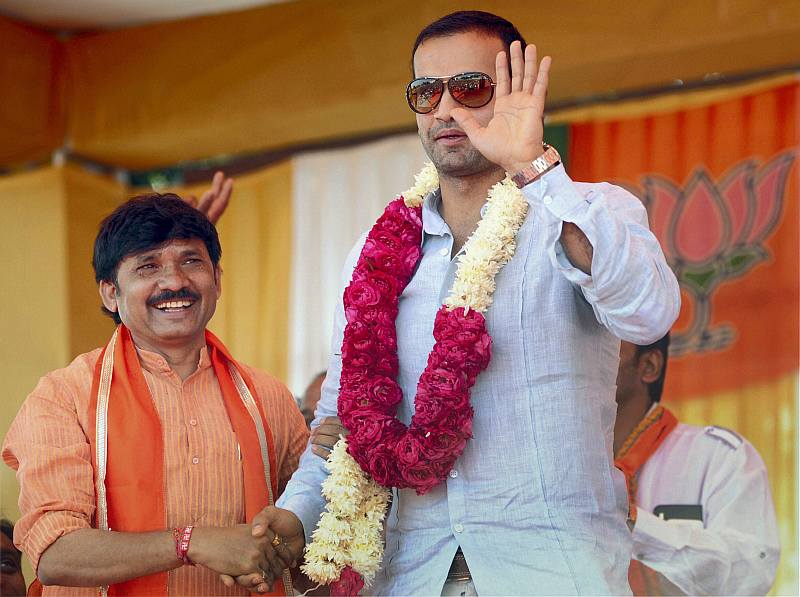 Cricketer Irfan Pathan today shared the stage with Gujarat Chief Minister Narendra Modi in the campaign rally of BJP, the party which is trying to appease minority community voters in the state.

During the rally for the second phase polling in the state, Irfan was seen standing besides the Chief Minister on the huge stage.

Irfan, who belongs to Vadodara and has been forced out of cricketing action by an injury, waved his hands to a huge gathering of supporters, who had come to listen Modi's speech.

In September 2011, Modi had launched 'Sadbhavana Mission' for peace and amity and to appease minority community voters.

However, the BJP has not fielded any candidate from the minority community for the Assembly elections.

The first phase of Assembly elections are scheduled for tomorrow while the second phase voting is on December 17. Counting of votes is on December 20.

Speaking at the rally, Modi said, "The menace of price rise will uproot the Congress."

"Gujarat has a strong co-operative sector in milk production and even Congress leaders in Delhi consume milk from Gujarat. Yet, they have placed 30 per cent tax on milk due to which its prices have increased," he said.

Likewise, due to rising diesel prices, the cost of vegetables has also increased, he said.

If someone promises something and fails to deliver on it, the person has a duty to come to the people and state the reason of being unable to fulfil the promise, but when Sonia Gandhi came to Gujarat she did not say a word on rising prices, the Chief Minister said.

Commenting on Rahul Gandhi, he said, "Rahul Baba stayed in UP for months. He went to homes of poor, lifted children, the photo session went on for 12 months. But, the number of photos taken was more than the number of votes he got! People know such leaders well."

He said the Congress neither has people nor issues in this election. Using their money power, the Congress may be all over the newspapers and television but they will not be able to enter the hearts of the people of Gujarat, he added.