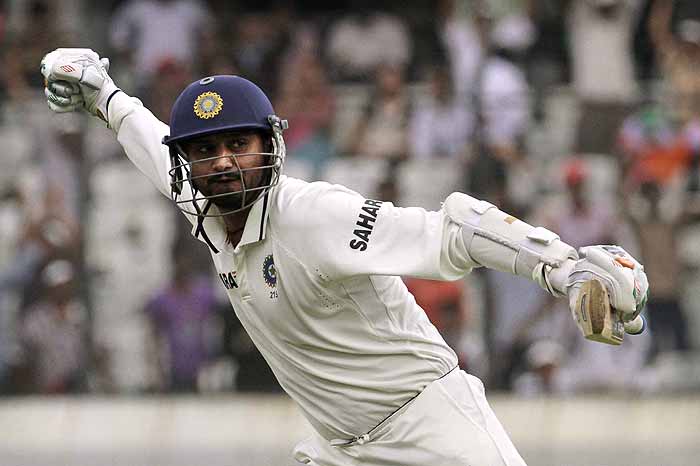 Print
A
A
A
increase text size
Outlook May 20, 2015 14:38 IST Harbhajan Returns to India's Test Squad After Two Years

Out of favour for more than two years, veteran off-spinner Harbhajan Singh today staged a comeback to India's squad for the one off Test match against Bangladesh while the ODI team was also kept full strength for the short series.

The 34-year-old Harbhajan, who has bowled well for Mumbai Indians in the ongoing Indian Premier League, was rewarded with a berth in the 15-member squad to be captained by Virat Kohli.

Barring Harbhajan, there were no major surprises in the squad announced by BCCI Secretary Anurag Thakur after a meeting of a five-member selection committee which lasted for more than an hour.

All-rounder Ravindra Jadeja was dropped from the Test squad while Mohammed Shami, who is recovering from a kinee surgery, has been left out of the ODI side. Mumbai medium pacer Dhawal Kulkarni has replaced Shami in the ODI squad. Kulkarni has played only four ODIs so far and has taken 8 wickets.

Contrary to speculation about top players being rested, the panel headed by Sandeep Patil decided to go with full strength squads for both the one off Test and the three ODIs starting June 10 in Fatullah. The three ODIs will be played on June 18, 21 and 24 in Mirpur.

"Harbhajan has been discussed earlier as well. The selection committee has picked Harbhajan due to the strength of Bangladesh batting especially the number of left-handers they have. It was decided that Harbhajan should be there for these reasons. Captain Virat Kohli's opinion was also taken on this," Patil told reporters.

Harbhajan last played a Test for India in March 2013 against Australia in a home series. The temperamental spinner is the third highest Test wicket-taker for India with 413 scalps to his credit in 101 matches.

The Test team has no place for veterans such as Virender Sehwag, Gautam Gambhir, Yuvraj Singh and Pragyan Ojha.

"There was no discussion on Yuvraj Singh. It will be difficult for me to say, who all were discussed. Whoever we felt, the captain and the selection committee, we discussed," Patil said.

"Everybody reported fit except Mohammed Shami and he will be available after four weeks. Otherwise everybody was available for selection," he added.

Patil said none of the senior players sought exemption from the tour.

selection committee has followed, we have been giving rest to a couple of players and we have considered requests from the players side also.

"But particularly regarding this tour, there was no request from any player so we went ahead picking the best-possible combination," he said.

Speaking about the combinations, Patil said the rival strengths and weaknesses were taken into account while deciding to line-up.

"When there is talk about selection and combinations and we talk about picking 15 players, the discussion about slots and our selection is based on all these factors. As I had earlier mentioned that with the kind of Bangladesh batting order and their six left-handers in the line-up, we discussed a need of having two off-spinners," he said.

"We also discussed about a few upcoming young off-spinners and then zeroed in on Harbhajan Singh. As the selection committee and the captain thought it to be the right choice," he added.

Asked why the team was not tinkered with too much, Patil said, "We have just returned from the World Cup where we performed well. Chopping and changing the team combination is not what we felt would be right. If needed, or any fitness issue crops up, we will look into it then."

On Jadeja being left out, Patil explained, "We not only discussed Ravindra Jadeja but all the other spinners who were there for selection. We have selected the best-possible spinners for this tour. Whenever we select a team for a particular tour, we always look at the strengths of the opposition team."