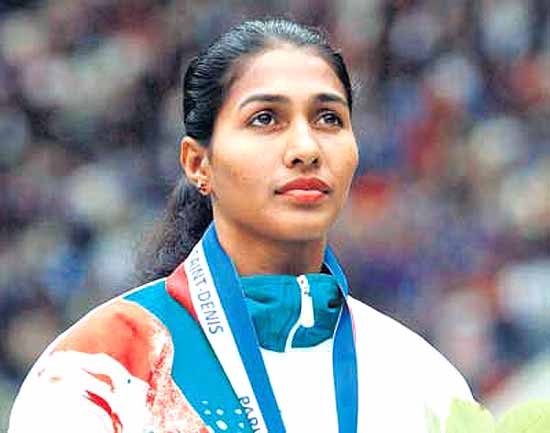 Announcing her decision to quit, the celebrated long-jumper said it was not proper to continue in the post after "allegations" and "misunderstandings" cropped up against her.

An emotional Anju also said, "anybody can kill sports but nobody can defeat a sports star".

Besides the iconic athlete, 13 other members of the council, including noted volleyball player Tom Jose, also resigned.

"It is not proper to continue even after hearing all these allegations. Me and my council members do not want to continue in the wake of such misunderstandings and allegations against us," Anju told a press meet here.

She declared the decision after an hour-long meeting at the Council headquarter here.

She said those who did not like her decision to form an ethics commission to expose corruption and illegal dealings in the Council in the past were behind the cropping up of false allegations against her.

"I do not think the allegations had occurred due to any issue from the side of government or the Council. Those who fear the proposed ethics commission are the ones who are behind all this," she said without naming anybody.

"As a revenue official and an athlete, who participated in a number of international competitions, I could easily find out many malpractices in the Sports Council, when I took charge. I think the problems began there," she alleged.

"Even my e-mail ID was hacked. In such circumstances me and my council members decided to form an ethics commission to expose the corru

Anju also said she had accepted the post of the Sports Council President, offered by the previous UDF government, thinking that it was her moral responsibility to serve sports sector in the home state.

Defending her brother Ajith Markose's appointment in a high-paying post in the Council, she said he is an established coach having international license, certified by Athletics Federation of India.

"His appointment was a government decision and not by the council. Me and other council members just upheld it. In the wake of the present controversies, he also decided to resign the post," she said.

Anju also wanted a detailed probe into the affairs of the Sports Council in the last 10 years including that of the sports lottery.

"The sports lottery was one of the greatest corruption which occurred in the sports sector of the state. The corruption, related to the various infrastructure projects implemented by the council should also be probed. We want all these to be investigated by the Vigilance Commissioner," she said.

Anju had earlier this month alleged that the Sports Minister had "insulted" her and accused her of "corruption" when she came to meet him for the first time, after the CPI(M)-led LDF government came into power.

Anju, who was appointed as Council President by the previous UDF government, also complained to Chief Minister Pinarayi Vijayan about the Minister's behaviour.

She had later sent an open letter to Jayarajan seeking a detailed probe into the affairs of the council in the last 10 years.