'I To I And I For I, Means India With Israel, India For Israel': Modi Tells President Rivlin 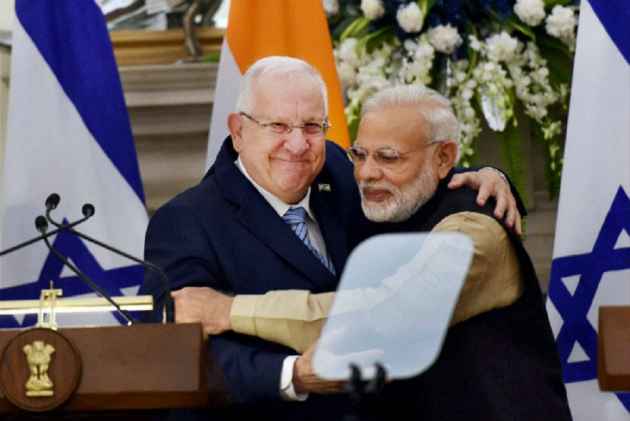 Hailing the ties between the two nations, Modi said: "...Today it is 'I to I and I for I'. When 'I say I for I, I don't mean the popular saying but what I mean is India with Israel, India for Israel".

Modi, who arrived in Tel Aviv yesterday for a three-day visit, met Rivlin at his residence here.

"The President of Israel welcomed me so warmly, he broke protocol. This is a mark of respect for the people of India," Modi tweeted.

"It is a privilege to meet President Rivlin again today. I fondly recall his visit to India last November when he charmed us with his affable manner and desire to do more with India," Modi wrote in the guest book at the President's residence.

"President Rivlin is admired in India for his unstinting belief and common good of mankind, I thank him for his friendship and his warm hospitality," wrote Modi, who is the first India prime minister to visit Israel.

Modi said during his visit to India, Rivlin started a phrase 'Make with India' and "I feel since my arrival yesterday that has been echoed by many people and I think what you started has now percolated to all levels".

Rivlin on his part described Modi as one of the greatest leaders in the world.

"We have a lot in common and doing a lot in common. We understood very well about your thought about the need to help partners who will 'Make in India'," Rivlin said.

"...We are doing a lot in order to fulfill your ideas about 'Make in India'," the Israeli President said.

"We only suggested some projects that may be we can do with India and I know that you have accepted that and appreciated that very much," he said.

Rivlin said there was a scope for cooperation between universities and industries of India and Israel.

"The....People in Israel are trying to find ways to invest in India and to make mutual projects together," he said.