Impose Governor's Rule If J&K Is To Be Saved, No Other Way, Says Former CM Farooq Abdullah 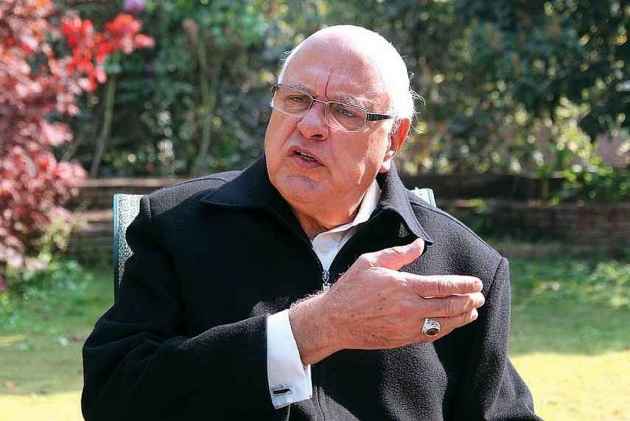 Print
A
A
A
increase text size
Outlook May 28, 2017 15:51 IST Impose Governor's Rule If J&K Is To Be Saved, No Other Way, Says Former CM Farooq Abdullah

Former Jammu and Kashmir chief minister Farooq Abdullah today called for the immediate imposition of Governor's rule in the state, stressing that it was the only way to control communal tension in the country.

"We have never been promoters of Governor's rule; we have always opposed it. But there is no other way," Abdullah, the newly elected MP from Srinagar, told PTI here.

The National Conference chief, who was recently called to New Delhi by Prime Minister Narendra Modi for a discussion on Kashmir, said Modi wanted a "peaceful end" to the situation in the state, reeling under unrest for months.

"I can't tell you what I discussed with the Prime Minister. All I can say is that he is concerned about the situation in the state and wants to an end to it. A peaceful end to it," he said.

The former chief minister, accusing the Mehbooba Mufti government of "failing on all fronts", said not just south Kashmir, the entire Valley was in the grip of "tragedies".

"These tragedies are adding to communal tension in the rest of the nation. So the quicker we settle this problem, (the quicker) would we be able to control the fire which is coming to a boiling stage," Abdullah said.

He also appealed to fringe elements in the BJP to not make "any provocative statements" on Kashmir.

"Let there be one voice. When the Prime Minister himself wants peace, others should listen to that," he said.

He stressed the CM should have resigned on the day the Centre gave in writing to the Supreme Court that it would not talk to separatists. Mehbooba Mufti had repeatedly asked for talks with "all stakeholders" in Kashmir.

"That completely baffles me because the PDP-BJP's agenda says they will talk to all. So if that agenda is gone, what is Madam Mufti doing on the chair? Should she not say goodbye and walk out if she has any honour left?"

He pointed out he had resigned as CM when the V P Singh government posted Jagmohan as Kashmir's governor in 1990. "It is not the chair I love, it is the people," he said.

Asked why there was no end to Kashmir's unrest, he said the militancy of the nineties was different from that now.

"Today the movement is different, because of the false promise of PDP leader Mufti (Mohammed Sayed) Saheb when he went for the elections with the promise to keep BJP and the RSS out. Unfortunately, at the end of the day he brought in the very people he had promised to keep away," he said.

"Part of this struggle is because of that 'vishwasghat' (betrayal) -- the trust that you betrayed - has raised its head," he said. He pointed out that most of the unrest was in the south, which was Mufti's stronghold.

He said the RSS's hold over the state government had added fuel to the unrest.

"The only way forward today, if they want to save the state and its future with the nation, is to bring in Governor's rule so that the functioning of the government can be impartial and steps are taken to win the hearts and minds of the people," he said.

"Keep the Assembly in suspended animation, and when things are brought round and people see a better, forward looking government, let the Assembly be restored," he said.

He added that in the two months of Governor's rule in January last year, Kashmiris had seen "good" governance.

"It was during the short period of governor's rule that flood relief money was disbursed to the poorest of the poor without any political favours," he said.

Abdullah reacted angrily when asked why his statements were seen as pro-separatist whenever he was out of power.

"I have never wanted power. At least I never ran after power. If that was the case, wouldn't we have joined the BJP to form a coalition government when they asked us to?"

Further, he said, separatists could not be ignored.

Abdullah reiterated that the state's troubles would disappear once Governor's rule was announced.

"Today they (PDP-BJP) is grabbing anyone and everyone who does not belong to their party, who have never picked up a stone in their hands; even their parents are pulled in and put into the lock up," he said.

"It is a witch-hunt, a total witch-hunt. That is why this unrest is not stopping," Abdullah said.