In a Veiled Attack on Vadra, Modi Takes a Dig at 'Dynasty Politics' 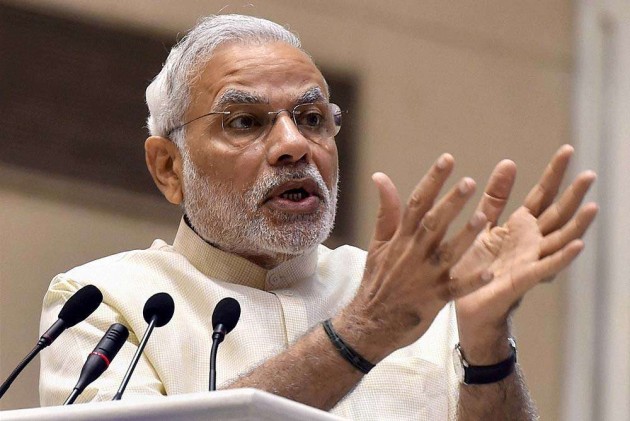 Dogra, who presented a record 26 budgets as Jammu and Kashmir's Finance Minister, was described as a "24 carat Congressman" by senior Congress leader Ghulam Nabi Azad at a function here for which Modi flew in here for a short visit.

Modi said that in public life it does not matter so much as to with what party one was connected, what ideology one espoused and under whose leadership one worked.

"Let us not divide our legacy. Everybody in public life works with some ideology in his lifetime but he lives and dies for the country. It is not for us, who are from the later generations, to create disputes," he said.

Modi's comments assume significance as ever since he became the Prime Minister in June last year, he has been accused by Congress of trying to "usurp" the legacy of its national icons like Sardar Patel, Lal Bahadur Shastri, B R Ambedkar and Subhash Chandra Bose.

Recently the BJP also sought to associate itself with late K Kamaraj, a former Congress President, hailing him as a national leader who had opposed Emergency and drew parallels between him and Modi.

Insisting that division of national heritage is a matter of concern, Modi said, "For us, all of them (national leaders) are great persons, who worked for the country are respectable and to be proud of. There should not be any untouchability about it.

"Whether he was in Congress or BJP, whether Prime Minister should have come or not? The question is not that. Yes he (PM) must come because the particular person has sacrificed his youth for for the nation. Our legacies should not be divided."

The Prime Minister also chose the occasion to criticise dynastic politics by citing the example of Dogra, who did not bring his family into public life despite being such a tall leader for so long.

An advocate by profession, Dogra was born in a small Bhaiya village in Kathua district and rose to national prominence. He died on November 27, 1987.

Contrary to speculation, the Prime Minister did not announce any package for the state.

Modi, who saw an exhibition on Dogra's life put up on the occasion, said, "I noticed that no member of his family is seen in his political life in any of these photos displayed at the exhibition. There is only one photo in which family members can be seen and that is his last rites.

"It's not an easy thing. He had such a long political career and worked with so many Prime Minister, still no family member was seen in his political journey. It is a difficult task. This is message for today's politicians. This gives inspiration. He maintained the decorum of political life.

Azad, as also Karan Singh, said Dogra had groomed a number of political leaders of the next generation.

Taking this forward, Modi quipped that Dogra had the special ability to identify people. In this context, he said Azad had been groomed by him. Also, he mentioned that Jaitley who was chosen by the late leader as the son-in-law.

"There is no match between his ideology and that of Arun ji. Despite that he gave his daughter to him," he said.

At the same time, he appeared to poke fun at Congress by making a veiled reference to Sonia Gandhi's son-in-law Robert Vadra, who is embroiled in land deal controversies. "Today, we all know what all is talked about son-in laws."

While disapproving political untouchability, Modi recalled that soon after Atal Bihari Vajpayee took over as Prime Minister, a senior Communist leader had died in Kerala.

Vajpayee told L K Advani to attend his last rites even though the Communist leader had steadfastly opposed BJP, the Prime Minister said.

Unfortunately, politics has come to such a pass that very few politicians are remembered after they die, he said.

"But there are some exceptions, who live even after their death, because of the work they do during their lifetime. Girdhari Lal Dogra was one of them.

"That he had the opportunity to present budget for 26 times as Finance Minister of the state is a rare thing. It happens when you have acceptablity and stability in political life and a committment to the responsibility given to you," he said.

Terming Dogra an inspiration for those who choose to lead a public life for serving the nation, Modi said, "During his student life, he worked for freedom with a strong ideology and, later, in political life, he spent maximum time in the government.

"I do not think (many) people in the country would have got an opportunity to present the budget 26 times. In J&K, there might two to three generations which can boast of having had the opportunity to be led by a leader like Dogra."

The prime minister further added, "He (Dogra) has created a chain of political workers who will vibrantly continue their life in politics in the future. He was not merely a politician and a man in public life to continuously work to create a generation of politicians."