India Home To Fourth-Highest Number Of Billionaires, 101 In All Says Forbes 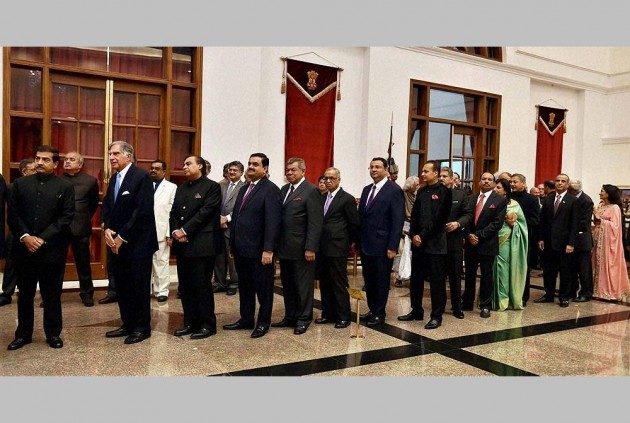 Print
A
A
A
increase text size
Outlook March 21, 2017 11:04 IST India Home To Fourth-Highest Number Of Billionaires, 101 In All Says Forbes

India is home to world's fourth highest number of billionaires with Reliance Industries chief Mukesh Ambani leading the club of more than 100 super rich Indians, according to a new list released by Forbes magazine.

The Forbes list of the 'World's Billionaires' 2017 consists of 2,043 of the richest people in the world who have a combined net worth of USD 7.67 trillion, a record 18-per cent increase over the past year.

The list has been topped by Microsoft co-founder Bill Gates for the fourth year in a row. He has been the richest person in the world for 18 out of the past 23 years.

Gates has a fortune of USD 86 billion, up from USD 75 billion last year, followed by Berkshire Hathaway chief Warren Buffet with a new worth of USD 75.6 billion.

Amazon's Jeff Bezos added USD 27.6 billion to his fortune; now worth USD 72.8 billion, moving into the top three in the world for the first time, up from number five a year ago.

US President Donald Trump is ranked 544th on the list with his net worth of USD 3.5 billion.

India is home to 101 billionaires, the first time it has has more than 100 super rich individuals.

The US continues to have more billionaires than any other nation, with a record 565, up from 540 a year ago. China is catching up with 319, Germany has the third most with 114 and India has the fourth highest number of billionaires.

Mistry's younger son Cyrus is embroiled in a legal battle with the Tata Group after he was suddenly ousted as chairman of Tata Sons, a position he had held since 2012.

Ambani, 59, leads the pack of Indian billionaires, coming in at the 33rd position with a net worth of USD 23.2 billion.

Forbes said the "oil and gas tycoon" sparked a price war in India's hyper-competitive telecom market with the launch of 4G phone service Jio last September. His younger brother Anil is ranked 745th with a net worth of USD 2.7 billion.

The younger Ambani sibling "orchestrated the merger of his Reliance Communication's telecom business with that of rival Aircel, controlled by Malaysian billionaire Ananda Krishnan. The combine, which awaits regulatory approvals, will be the country's fourth-largest mobile phone operator," Forbes said. (MORE) Next on the list of Indian billionaires is ArcelorMittal

chairman and CEO Lakshmi Mittal on the 56th spot with a net worth of USD 16.4 billion.

Forbes said the Indian steel baron regains his status as the world's second richest Indian on an uptick in steel prices and demand. "The world's biggest steelmaker also got a reprieve from import tariffs on steel imposed by the US and Europe and a one-time USD 832 million saving from a new labour contract signed last year with its US workers," it added.

The list includes only four women billionaires from India, led by Savitri Jindal and her family at the 303rd position with a net worth of USD 5.2 billion. "After declining last year, the fortune of steel and power clan, whose matriarch Savitri Jindal chairs the OP Jindal Group, rose as steel prices recovered," Forbes said.

Smita Crishna-Godrej from the Godrej clan is ranked 814th followed by Biocon founder Kiran Mazumdar-Shaw (973) and Leena Tewari (1030), chair of USV India which specialises in diabetic and cardiovascular drugs.

Founder of mobile wallet Paytm Vijay Shekhar Sharma is ranked 1567 with his net worth of USD 1.3 billion. Forbes said Paytm was "one of the biggest beneficiaries of the government's decision to demonetise 86 per cent of India's rupees and move to a cashless economy", notching up 200 million registered users and five million transactions daily.

Making his debut on the list at 814th spot is Acharya Balkrishna, friend of yoga guru Baba Ramdev, who holds 97 per cent stake in the fast-growing consumer goods firm Patanjali Ayurveda. His net worth is USD 2.5 billion.

Forbes said Facebook founder Mark Zuckerberg moved up to number five for the first time, after his fortune rose USD 11.4 billion in 12 months.

Meanwhile Carlos Slim Helu of Mexico, once the world's richest man, fell to number six, the first time he's been out of the top five in a dozen years. There were 195 newcomers.

China had the most new ten-figure fortunes with 76. The US was second with 25. The list has 56 billionaires under age 40, down from 66 last year, after some aged out and others dropped below the USD 1-billion mark.

Seventy-eight people fell off the list, including 33 from China, 7 Americans and 9 who are still super wealthy but share their wealth among extended family members and therefore are not eligible for these ranks.