India, Israel Now Strategic Partners, Vow To Do More Against Terror Together 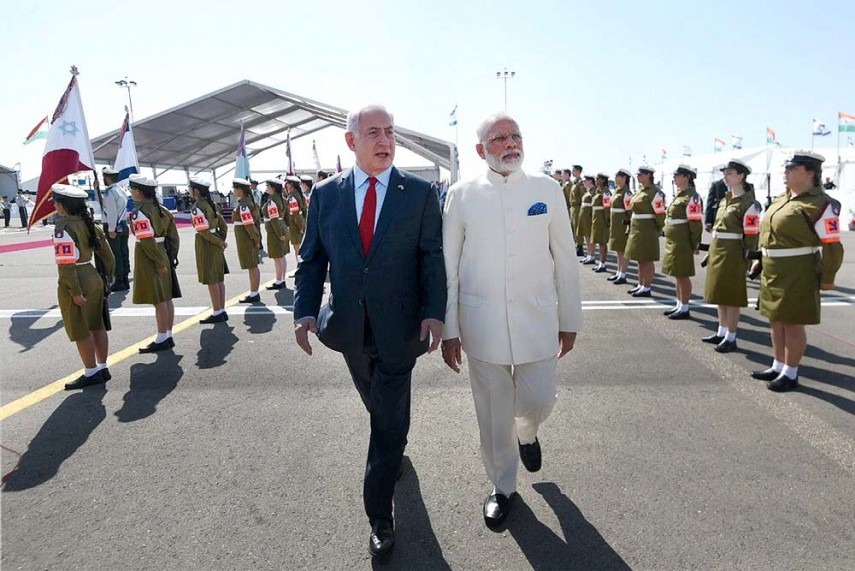 Print
A
A
A
increase text size
Outlook July 05, 2017 19:25 IST India, Israel Now Strategic Partners, Vow To Do More Against Terror Together

India and Israel today elevated their ties to the "strategic partnership" level with a vow to do "much more together" to combat growing radicalisation and terrorism and pitched for "strong measures" against those financing and providing sanctuaries to terror groups.

The issue of terror and "strategic threats" along with various other topics like cooperation in defence and security, water, agriculture, space and West Asia figured prominently in the talks between Prime Minister Narendra Modi and his Israeli counterpart Benjamin Netanyahu here today.

"Our goal is to build a relationship that reflects our shared priorities and draws on enduring bonds between our peoples," Modi, who is the first Indian prime minister to visit Israel, said in a joint media appearance with Netanyahu.

Modi, on the second day of his three-day visit, said India and Israel live in "complex geographies" and are aware of "strategic threats" to regional peace and stability.

"India has suffered first-hand the violence and hatred spread by terror. So has Israel," he said, adding the two leaders had "agreed to do much more together to protect our strategic interests and also cooperate to combat growing radicalization and terrorism, including in cyber space."

Netanyahu said the two countries need to cooperate in the field of counter-terrorism as he described 26/11 as a "horrible terrorist attack".

Foreign Secretary S Jaishankar, while briefing the media on the talks later, said that the two countries had decided to elevate their relationship to the strategic partnership, which gives a special dimension to the ties.

A joint statement issued after the talks said "strong measures should be taken against terrorists, terror organisations, their networks and all those who encourage, , support and finance terrorism, or provide sanctury to terrorists and terror groups."

Though nobody was named in this context, the Indian side saw this as a reference to Pakistan.

The two leaders recognised that terrorism poses a grave threat to global peace and stability and reiterated their strong commitment to combat it in all its forms and manifestations, the joint statement said.

"They stressed that there can be no justification for acts of terror on any grounds whatsoever," it said.

Both leaders also committed to cooperate for the early adoption of the Comprehensive Convention on International terrorism (CCIT), the statement added.

The two sides signed seven agreements, including in areas like space, agriculture and water conservation.

India and Israel also agreed to set up a USD 40 million fund for industrial Research and Development, and innovation fund, with both countries contributing USD 20 million each.