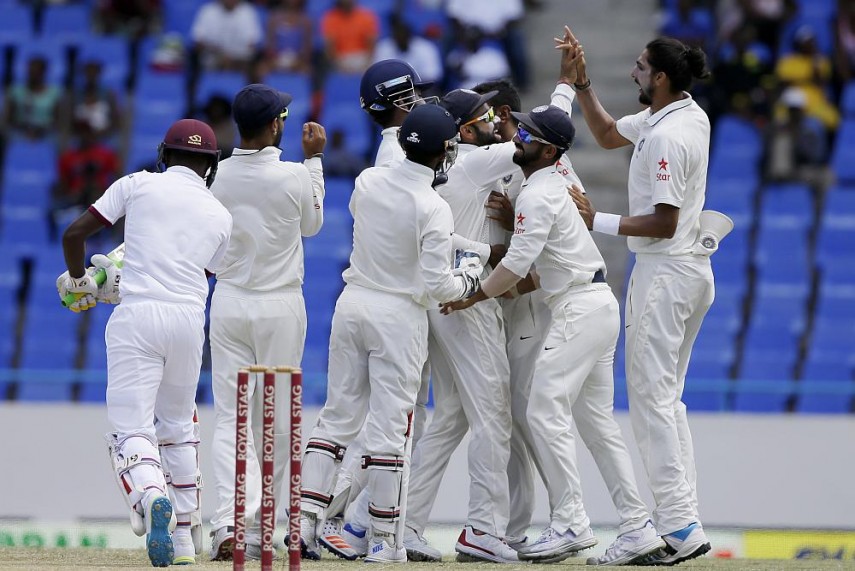 India's supremacy remained unrivalled as they rode on Ravichandran Ashwin's 7/83 to outplay the West Indies by an innings and 92 runs, their biggest win outside Asia, in a lopsided first cricket Test to take a 1-0 lead in the four-match series here today.

Ashwin produced an off-spin bowling masterclass and triggered a second-innings slide that saw the hosts collapse from 88/2 to 132/8 on the fourth and penultimate day.

A defiant ninth-wicket stand of 95, West Indies' highest in the game, between Carlos Brathwaite (51 not out) and Devendra Bishoo (45) delayed the inevitable before Ashwin came back to seal the issue by bowling the hosts out for 231.

This was also the Tamil Nadu spinner's first five-wicket haul outside the Asian continent.

India bowled out the West Indies for 243 in their first innings, having amassed 566 for eight declared after opting to bat. Forced to follow-on after conceding a massive lead of 323, the hosts failed to cope up with intense pressure created by Ashwin and Co on a pitch that offered assistance to slow bowlers.

At the Sir Vivian Richards Stadium, the visitors shot out the hosts in three hours over the post lunch and tea session to finish their two innings at 243 and 231.

After tea, Brathwaite reached his third Test fifty, but the rest of the innings folded in just over 40 minutes. Bishoo hit straight to midwicket off Ashwin in the 78th over, and three balls later bowled Shannon Gabriel (4) to wrap up the proceedings with a day to spare.

Post lunch, it was an extended session of play which proved enough for India to force a win. But first they had to break through the 67-run partnership between Rajendra Chandrika (31) and Marlon Samuels (50). The two batsmen began again in the same vein, trying to play for time, and in doing so, the latter crossed the 50-mark off 74 balls raising hopes of a fight back.

But it was short-lived as Chandrika had a faint inside-edge off Ashwin in the 36th over, judged accurately by the umpire and caught on the third attempt by Wriddhiman Saha. It started the slide for West Indies and the off-spinner barged into the opening he had found.

In the very next over, he removed Jermaine Blackwood (0) for a second duck in the match, with skipper Virat Kohli holding a magnificent diving catch at midwicket to aid in the dismissal.

Then came the best moment for Ashwin, as a beautiful delivery beat Samuels' straight bat and knocked back his off-stump in the 42nd over.

Four overs later, Ashwin had Roston Chase (8) caught at forward short leg and the West Indies' resistance was more or less over.

At the other end, Amit Mishra (1-61) trapped Shane Dowrich (9) LBW and then Ashwin returned in the 54th over to complete his first five-wicket haul outside the sub-continent by bowling Jason Holder (16) through the gate. It was the second time in Test cricket that the off-spinner celebrated a double of Test hundred plus five-wicket haul.

India then looked to wrap up the innings quickly, but a sedate 69-run stand for the ninth wicket between Brathwaite and Bishoo thwarted their efforts to wrap up the match before tea. The duo played some attacking strokes and brought up the 200-mark going into the break.

Earlier, a short rain shower stopped India's march as the hosts went into lunch at 76/2.

The morning had begun with overnight batsmen Chandrika and Darren Bravo (10) looking to play on for time as well as score runs whenever possible. India started the proceedings with Ishant Sharma (1-27) and Umesh Yadav (1-34), the duo looking sharp and bowling fuller deliveries, especially the former who was a marked improvement from his first innings' outing.

And this brought immediate success as Yadav sent back Bravo off the fifth ball of the day, as Ajinkya Rahane dove to his left and held a two-handed catch at gully. The duo bowled a consistent spell thereafter, testing both Chandrika and Samuels, but the batsmen showed enough resilience to stay put at the wicket.

Samuels in particular looked aggressive and used good hand-eye co-ordination to smack nine boundaries in the session. The two batsmen put on 50 off 98 balls, while the West Indies' score crossed the 50-mark in the 27th over.

Mohammed Shami (0-26) was soon introduced into the attack, and he was on the money straightaway.

There was one incident where he could have sent Samuels back, as he induced an edge only for the ball to die down on its way to the keeper Wriddhiman Saha. He caught the ball but the umpires checked upstairs for a replay and replays didn’t prove conclusively that the catch was cleanly taken, and Samuels was given a life in the 25th over. He was on 16 at that time

Samuels raced on quickly thereafter and looked more comfortable at the crease as time passed, as did Chandrika at the other end.

About 40 minutes were left for lunch when rain intervened and cut short the session. Despite the shower passing by, the umpires called for an early lunch to allow for the ground staff to prepare the field for resumption.

Meanwhile Ashwin, who recorded his 17th five-wicket haul in Tests, ran through the West Indies batting line-up after Samuels and Chandrika defied India in the first session.

Chandrika's dismissal four overs after the lunch break, taken early due to a short spell of rain, triggered a slide from which the hosts failed to recover.

The opener's dismissal was followed by those of Jermaine Blackwood, who had a pair in the match, Samuels, debutant Roston Chase, Shane Dowrich and skipper Jason Holder as West Indies slumped to 132 for eight.