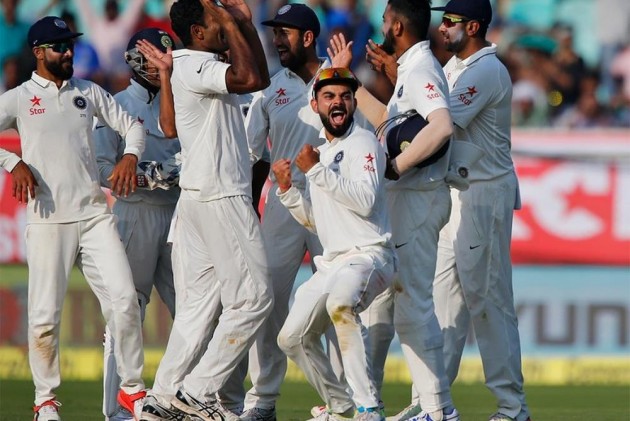 India added to England's winter of discontent in a manner befitting their dominance as the hosts clinched the five-match series 4-0 with an innings and 75-run victory in the fifth and final cricket Test here today.

Spinner Ravindra Jadeja was the hero of the day as he returned exceptional figures of 7/48 to spell doom for England.

Jadeja's effort deserves special mention as he shone on a pitch where there were no demons. However, triple-centurion Karun Nair walked away with the Man of the Match award for his unbeaten 303-run knock that set the tone for the victory.

In the process of winning their ninth match of the year to stretch an unbeaten run to 18, the hosts wrote and rewrote a plethora of records, including notching up their biggest-ever series victory over England.

Their previous best was the 3-0 verdict under Mohammed Azharuddin's captaincy in 1992-93.

Having made a sedate start to the day, England made a hash of it after tea as they lost their last six wickets for a mere 15 runs.

England were staring down the barrel at 200 for eight, with Jadeja doing the bulk of damage in an exceptional display of slow bowling on a pitch that was one of the flattest in recent times.

The left-arm spinner, who also pulled off a brilliant catch earlier in the day, triggered the English slide when he lured Moeen Ali into playing a casual shot after the tea break.

From 192 for four, the scoreline suddenly read 200 for eight, with plenty of overs left for Indian bowlers to wrap up the tail.

It soon became 207 for nine as the inevitable dawned on England and the end came when the last line of defence, Jake Ball, was foxed by Jadeja for a three-ball duck.

Celebration erupted in the stands at the M A Chidambaram Stadium, and the Indian players also broke into wild celebrations following the team's fifth successive Test series win since September last year. The win also made it India's longest unbeaten run in Test cricket, surpassing the previous best of 17 wins between 198-87.

In front of the plenty of heads totting the stands, the Indian players went on a lap of honour.

A pall of gloom, however, descended on the English camp, while the Indians' joy knew no bounds.

England lost 10 wickets in 48.2 overs, for the addition of 104 runs, after their openers - captain Alastair Cook and Keaton Jennings - had added 103.

Jadeja got into the act after lunch as he struck thrice to bring the spring back in India's steps to leave England at 167 for four at tea.

Jadeja first cut short Cook's stay at the crease when he was one shy of a half century, followed that with the dismissal of Jennings (54) and then sent back Joe Root (6) to leave England in a spot of bother at 126 for three.

The situation got worse for the visitors when they lost Jonny Bairstow, sent back by a Ishant Sharma, who looked pretty sharp and thereafter, tested Ben Stokes with deliveries that got off the wicket.

At tea, first-innings centurion Moeen Ali and Stokes were batting on 32 and 13 respectively, cutting down the deficit to 115 runs with six wickets remaining.

Jadeja, who pulled off a brilliant catch at midwicket to end Bairstow's brief stay in the middle, had impressive figures of 3/38 before the start of the final session.

Moeen and Stokes' partnership had consumed 12 overs by tea, and had settled English nerves a bit.

Even though the hosts looked threatening, England took solace from the fact that the pitch remained pretty flat and hoped to avoid a 0-4 drubbing even with an set ultra attacking field placements. That was, however, not to be as wickets fell in a heap in the final session.

The first wicket of the day came when Cook, like he often does, shuffled across too much and ended up giving a catch at leg slip.

Jennings offered a return catch to Jadeja in a soft dismissal, while Root was out lbw after he went for a sweep and failed to connect.

Virat Kohli went for a review after the on field umpire thought otherwise, and the India skipper was right as replays showed the full ball hitting the leg stump.

Then Bairstow flicked one towards deep midwicket and an agile Jadeja too a great catch running backwards.

That was tea, and things only got worse after the break.

Moeen was the first casualty after tea as he fell to Jadeja's guile - caught at mid-on by Ravichandran Ashwin to a casual shot.

Jadeja was not done as he next dismissed Ben Stokes, who hit straight into the waiting hands of Karun Nair at midwicket.

Liam Dawson became Amit Mishra's first wicket of the inniings, while Adil Rashid and Stuart Broad too perished quickly. More Earlier, England got through to lunch unscathed, reaching 97 without suffering an early setback.

Having already conceded the five-match series, England had their backs to the wall on the penultimate evening after Nair notched up an incredible 303 to put the hosts in a commanding position, from where they could gun for a 4-0 series win.

Trailing by 270 runs after conceding a huge 282-run first-innings lead, an innings defeat was not out of question when the English openers made their way back to the pavilion at stumps on the fourth day.

However, skipper Cook and Jennings stood firm and succeeded in negotiating the Indian bowlers in the first session of play on what was by far the best batting surface in the series.

Cook was batting on 47 while Jennings, who had scored a century on debut in Mumbai, was giving the English captain company on 46.

Luck was on England's side as Cook got a life a couple of overs into the day's proceedings. The bowler to suffer was off-spinner Ashwin as wicketkeeper Parthiv Patel failed to latch onto an outside edge from the left-hander's willow.

As the ball turned away from Cook, Parthiv moved to his left but the ball brushed the gloves and fell in front of slip. The ball would have gone straight to Virat Kohli if Parthiv had not moved to his left. Cook was on 4 then.

The pitch wasn't exactly the kind where the spinners could extract big turn, but Ashwin and Jadeja fancied their chances.

Even with fielders placed around the batsmen, they could not succeed, though Ashwin should have had a wicket to his name by lunch.

Cook and Jennings had been watchful, showed the gumption to fight for a draw and though there was one clear chance, the pitch has nothing for the bowlers.