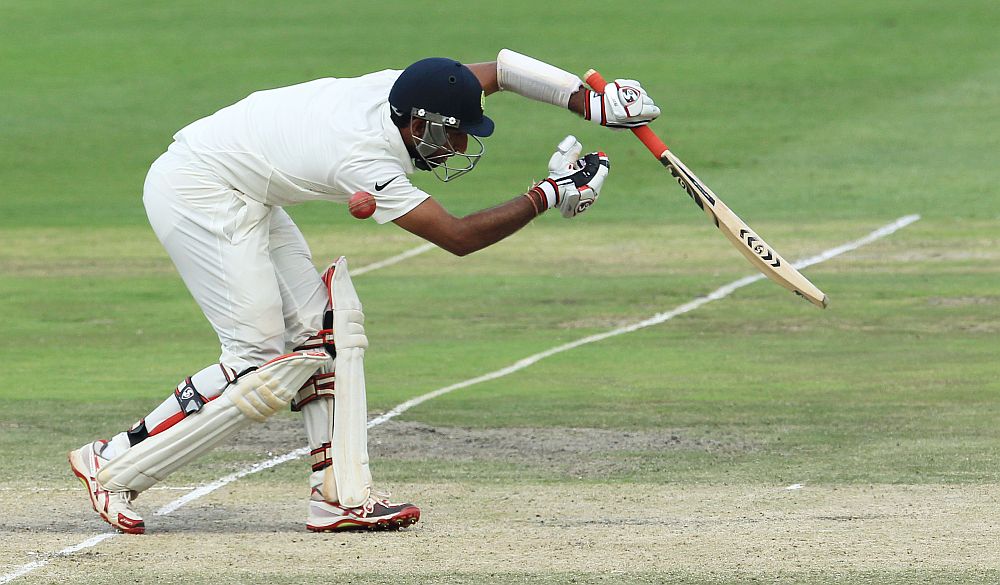 Cheteshwar Pujara slammed a sparkling unbeaten 135 as India gained firm control of the first cricket Test against South Africa with the top-order showing remarkable application to give the visitors a substantial overall lead of 320 here today.

The 25-year-old Pujara notched up his sixth Test century while the in-form Virat Kohli is looking good for another big score as he is batting on 77.

The duo put on 191 runs for the unbroken third-wicket stand in only 44.1 overs as South Africa were dealt with a telling blow of Morne Morkel being ruled out of the match due to a ligament tear in his ankle while fielding.

Pujara, who was dropped on 51 by leggie Imran Tahir off his own bowling, made full use of the reprieve as he hit 18 boundaries in 221 balls. Unlike first innings, Kohli played the second fiddle hitting eight fours off 132 balls as South African captain Graeme Smith couldn't devise a strategy to get the duo out.

With two full days left in the game, the visitors will now try to extend the lead further by piling up some quick runs and then hope to dismiss the Proteas who will have to bat last on a deteriorating Wanderers track.

Murali Vijay and Cheteshwar Pujara batted with lot of grit as India reached 109 for two in 40 overs at tea, thereby extending the overall lead to 145.

Vijay (39) and Pujara (39 batting) added crucial 70 runs for the second wicket as the Indian batsmen took full advantage of speedster Morne Morkel being ruled out of action due to a twisted ankle during fieldinghaving bowled only two overs.

Tamil Nadu opener Vijay looked assured during his 94-ball knock as he hit five boundaries and it was unfortunate that he got out after getting set as he flicked a delivery from Jacques Kallis (1/23) down leg-side into the hands of AB de Villiers behind the stumps.

Pujara on his part was watchful as ever during his unbeaten 107-ball stay at the wicket so far in which he hit four boundaries and also rotated the strike to keep the scoreboard ticking.

Pujara-Vijay brought up the India's 50 in the second innings in the 23rd over. With drinks break coming up, Tahir came up to bowl and was taken for nine runs immediately.

Tahir didn't get to bowl another over in the whole session, but in the one he bowled, India's lead went past the 100-run mark.

Even after Vijay's departure, Pujara carried on the good work in company of first innings centurion Virat Kohli (6 batting).

Dale Steyn (0/29 in 14 overs) upped the ante against Kohli with innovative field settings that included couple of short covers and short mid-wickets but it didn't cause any damage to the visitors. Even De Villiers handed his keeping gloves to Hashim Amla and rolled his arm over at the stroke of tea.

Veteran Zaheer Khan polished off the South African tail taking three of the last four wickets, as India bowled out the home team for 244 thereby taking a first innings lead of 36 runs.

India were 31 for one having extended their overall lead to 67 after Shikhar Dhawan (15) was sent back by Vernon Philander being caught by Jacques Kallis in the slip cordon. Incidentally, Dhawan became Philander's 100th victim in Test cricket.

In the morning, South Africa added 31 runs before Zaheer (4/88) and Ishant Sharma (4/78) took the remaining four wickets for addition of another 31 runs. Philander (58), who was on 48 overnight, completed his third Test fifty with a cover drive off the very delivery of the day.

India's pace spearhead Zaheer's wickets tally now has gone up to 299 and he will be gunning to enter the 300-wicket club when India come out to bowl in the South African second innings.

Dhawan and Vijay (12 batting) began the second innings with an hour left for the lunch. And they began calmly, especially the latter, looking to leave as many balls as possible.

Dhawan again looked uncomfortable as he faced up to opening spells by Dale Steyn and Philander.

Philander (1/18) especially troubled the batsmen as the pitch got quicker on the third morning, adding pace to his nagging line and length. Dhawan had a couple close calls, but also had a great escape in the eighth over.

The right-arm seamer improvised on the next delivery though and Dhawan played at it, edging to Jacques Kallis at second slip.

Dhawan's 15 came off 21 balls with a boundary before he became Philander's 100th victim in 19 Test matches.