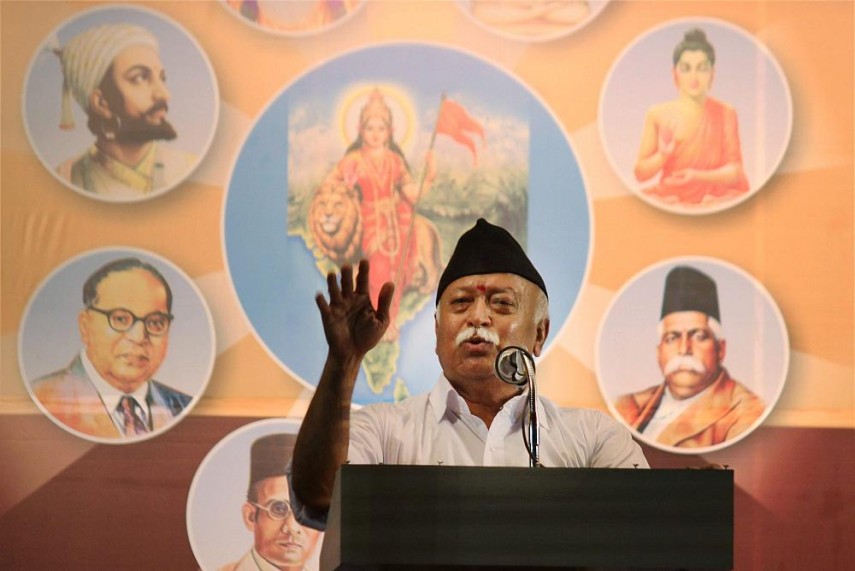 Print
A
A
A
increase text size
Outlook November 11, 2016 18:40 IST 'India Will Not Be Able to Realise Its Potential Till Women Power Comes Forward'

RSS chief Mohan Bhagwat today said India will not be able to realise its potential and glory and act as guiding force to the world for peaceful coexistence till its woman power comes forward.

"Till India's 'matra shakti' (women power) turns active and comes forward, India will not be able to achieve its potential and pristine glory and act as a guiding force to the world to show it the new path of peaceful coexistence," he said while speaking at the inauguration of the 3-day training camp of Rashtriya Sevika Samiti, the women wing of RSS.

Bhagwat said India through its rich traditions has the potential to act as a guide to the world and that can only be realised when Hindus, including women, unite and get together.

The RSS chief added that in this fast-emerging world where science is progressing rapidly, India has the potential to show the world the path to future where there is peace and coexistence without discrimination of any kind.

"India has the potential to take the world forward and no other nation," he said.

Bhagwat said while the world order changed from being bipolar to unipolar, America's supremacy was waning and Russia was again emerging and China was also fighting with the two in this competition to outdo each other, but lamented that no one talks about India as of now.

"But India has the potential to emerge. It may not be visible today, but it will emerge," he said.

"India does not just follow tolerance, its rich traditions also follow the principles of acceptance and respect," he said.

He added that while the world is full of conflicts and "fault lines" continue to exist in the fast-emerging world and India has the potential to lead the world and show it the future path. H also called for a world free from conflicts

Talking about technological and scientific advances, he said, today the Rs 500 and Rs 1,000 notes have turned defunct and tomorrow a new world may emerge where there could only be financial transactions through electronic or cashless mode. He said a time may come when 90 per cent of the work may be done through instruments of technology.

The RSS chief said fanaticism and communalism give rise to conflicts and the world has to realise the goal of peaceful coexistence.