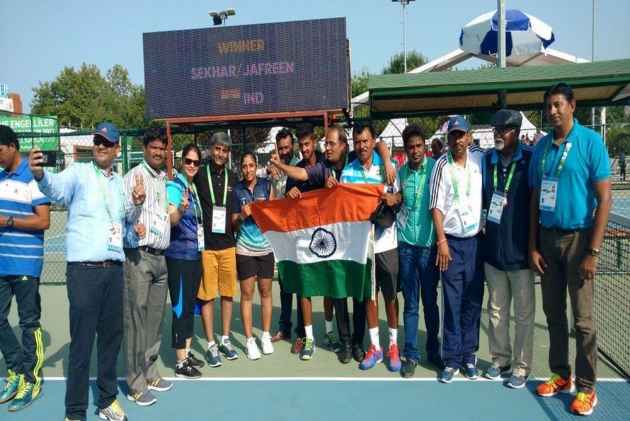 Print
A
A
A
increase text size
Outlook August 01, 2017 11:50 IST India's Deaflympics Team Refuses To Leave Airport After No Govt Official Turns Up For Reception

The Indian continent of hearing impaired athletes that participated in the 23rd edition of the Summer Deaflympics in Samsun, Turkey, refused to leave Indira Gandhi International Airport on Tuesday morning as there was no one around to receive them or celebrate their success.

The contingent of 46 athletes and support staff said they were upset with the government not welcoming their success in the games, which included winning four medals, including one gold. This is the best showing ever for the country in this category.

It is also learned that the players wanted to speak to Sports Minister Vijay Goel but he paid no heed to their request.

"The Indian contingent participated in a total of eight disciplines at the games. Out of those eight disciplines, we won medals in three. We won gold and bronze in wrestling, bronze in lawn tennis and silver in golf," Ketan Shah, team's interpreter, told ANI.

"All we want is either the sports minister or any government official comes here and appreciates our players. We had informed them that we will be coming on August 1, but we haven't got any reply. We have been trying to contact officials, but we are just being told that they are unavailable," he added. (ANI)

Continue FREE with Ads Pay Rs. 1 to Read Without Ads
READ MORE IN:
Sports
Next Story : 'I Am Transgender': A 'Devastated' US Soldier Shares Personal Journey
Download the Outlook ​Magazines App. Six magazines, wherever you go! Play Store and App Store