Kanhaiya Does Not Appear to Hamper Probe in Sedition Case: Delhi HC 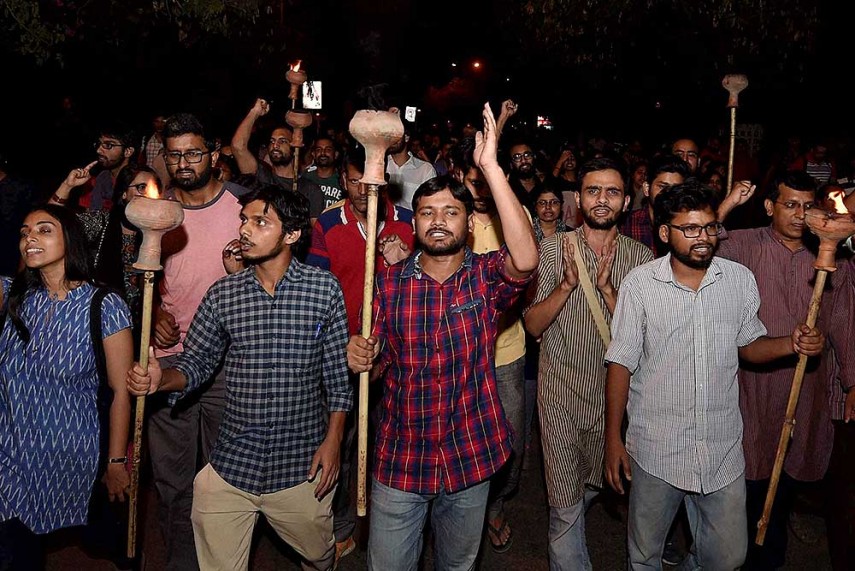 Print
A
A
A
increase text size
Outlook July 19, 2016 18:19 IST Kanhaiya Does Not Appear to Hamper Probe in Sedition Case: Delhi HC

JNUSU President Kanhaiya Kumar does not appear to hamper probe in the sedition case, the Delhi High Court today said and wanted to know from police whether there was any circumstance which requires cancellation of the interim bail granted to him.

"When your investigation is going on smoothly, what is there which requires his (Kanhaiya's) bail cancellation? He is not hampering the ongoing investigation," Justice P S Teji asked advocate Shailendra Babbar who was appointed as special public prosecutor (SPP) for representing Delhi Police in the matter.

Responding to the court's query, Babbar said there was no application by the police seeking cancellation of the bail.

"We are not asking for it (bail cancellation)," he said during the hearing in which private persons have filed pleas seeking cancellation of six months interim bail granted to Kanhaiya on the ground that his speech after his release from Tihar Jail in March was "anti-national" and he had violated the bail conditions.

Kanhaiya, who was granted interim bail on March 2 by the high court, is facing sedition charge in connection with an event at JNU on February 9 where anti-national slogans were allegedly raised and Parliament attack convict Afzal Guru was hailed as a 'martyr'.

During the hearing today, the court also pulled up police for not filing its reply on the petitions after the SPP said that they had filed a status report in the matter.

"It is a reply in the form of a status report," he said.

When the court said that it would hear the matter after the police filed its reply, advocate R P Luthra, appearing for one of the petitioners, said, "What is the purpose of hearing this petition if the period of six months bail will be over. This plea is for cancellation of bail".

The court said if he would argue the matter then it would pass an order.

When the petitioner's counsel said that he would argue the matter, the judge said, "Let them (police) file a reply".

"You cannot teach the court how court should function," the judge said and posted the matter for hearing on August 9.

The court also disagreed with the contention of SPP who said that since Kanhaiya has been named as a respondent in the plea, he should also be heard. (More)

During the hearing, Luthra told the court that it should

decide on his plea before the period of six-month interim bail is over.

When the counsel insisted that the matter should be heard, the judge said, "I will now pass an order. Nobody is with you for cancellation of bail. You cannot be above the court. You have filed the petition and the court will decide on it."

Earlier on April 28, the hearing in the matter witnessed a confrontation between the AAP government and Delhi Police over the issue of representing the state.

AAP government had earlier told the court that there was no violation of any bail condition by the student leader.

The police had earlier said that it cannot comment on the pleas seeking cancellation of interim bail granted to Kanhaiya without verifying facts and they were investigating whether any bail condition was violated.