Kanhaiya to Hold All India Convention for 'Rohit Vemula Act' 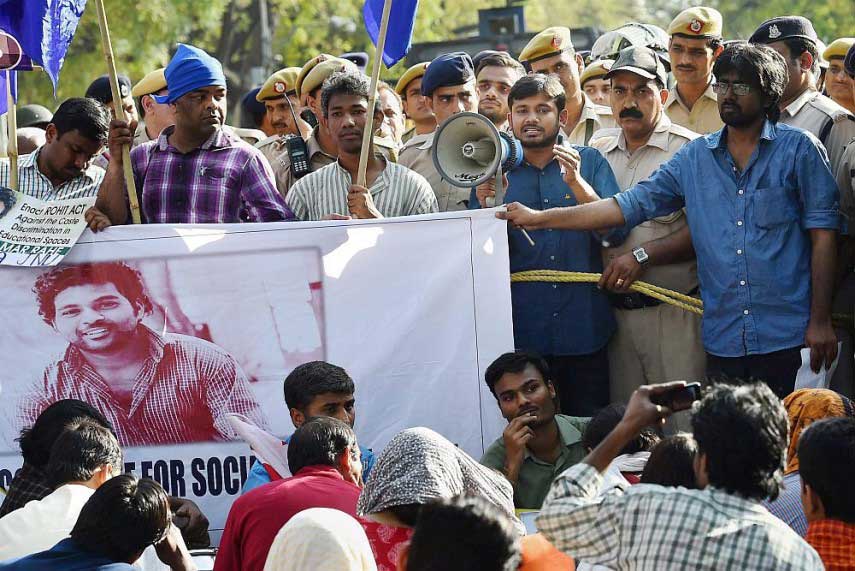 Print
A
A
A
increase text size
Outlook July 31, 2016 13:30 IST Kanhaiya to Hold All India Convention for 'Rohit Vemula Act'

JNU Students Union president Kanhaiya Kumar, who has been leading a movement demanding justice for Dalit research scholar Rohit Vemula, today said they may organise an all India convention on 'Rohit Vemula Act' in Delhi or Hyderabad.

He also alleged that the Hyderabad Central University authorities curb democratic rights in the name of "surveillance", and vowed that the agitation will continue until the government brings in a 'Rohit Vemula Act' to check "atrocities on Dalits and oppressed classes".

"There is no normal situation on the campus. In the name of surveillance, democratic rights of the people are attacked. Meetings are not allowed. Even media vehicles are not allowed in the university. This will endanger the democratic fabric of the society," Kanhaiya Kumar said.

"I went to HCU in an informal way today and visited Veliwada (place where Vemula and four other suspended students used to sit in protest). I paid homage to Rohit Vemula. We will not allow Rohit Vemula-like incidents to happen in future. We will also plan an all India convention on Rohit Vemula Act either in Delhi or Hyderabad," said Kumar, who is in the city to participate in a seminar.

He, however, did not specify any time frame for holding the convention.

Vemula was found hanging in his room at a hostel in the university earlier this year.

Taking a dig at Prime Minister Narendra Modi, he said currently "Modicracy" is prevalent in the country instead of democracy.

He demanded that the government should increase budgetary allocations to education.

"Our Defence allocation is more than the education. This year budget for allocation for education was cut by 14 per cent," he said.

Replying to query on the attacks in the name of cow slaughter, Kanhaiya said every citizen has a right to eat whatever that suits him or her and people should not take law into their hands in the name of protection of animals.